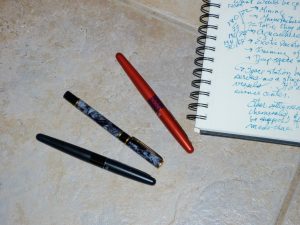 {chortle!} Well, this may not rise to the level of ballad, since its author still has to clean the pool this afternoon. There are only so many minutes in the day. But by way of resisting work, here I am with another little rave.

You’ll recall that one of my scribbling acquaintances and I rediscovered the joy of writing with actual fountain pens and actual ink. Since that revelatory day, I’ve taken to drafting the current chapter of the current (increasingly challenging…) novel this flat stuff called paper, using these sticks that hold ink, which leaks out when you run the pointed end of the stick across the paper.

Its main benefit is escape from the tyranny of technology.

Another of my writing acquaintances reported that her system went down and she had to have the hard drive rebuilt. She was in a sweat, since she’s been laboring long and hard to produce her next book. Fortunately, she succeeded in saving most of her draft. But it sounds like she did so on a wing and a prayer.

Truth to tell, whatever you have on paper is likely to be just a draft of whatever you end up with in your computer. If you’re like me, you revise during the act of typing, and then you go over and over your MS copy, revising and touching up and adding and deleting.

But at least if you have a first draft in pen & ink, it’s not going to be utterly gone when your computer is gone. And as you know, the computer going down is not a matter of “if”; it’s a matter of “when.”

It also has another advantage: it takes you away from an environment rife with distraction. Writing with a pen, I’m finding myself a lot more likely to sit still and finish a scene — or at least to mock it up roughly — than I am when I’m on the computer. With no recourse to Google, I don’t waste time cruising the Internet in pursuit of the answer to some irrelevant question. I don’t ease my aching brain by loading up a Mah Jongg game. I don’t kill time in the voracious timesuck that is Facebook. I don’t check the email every three or four minutes, or kill some more time writing an email answer that could wait for awhile.

Even if all you intend to do is process words or enter bookkeeping entries, computer technology reaches out its tentacles to take over your life. One could speculate that it has the potential to strangle creativity.

When I was a young pup, all those years ago, I was an early adapter of PC technology. I made my husband buy me one of the first marginally affordable desktop IBMs, and I learned to write online in WordPerfect and XyWrite. I became proficient in DOS and fumed at being herded into windows and rodents.

The thing seemed like such a miracle! In those days, I felt it cultivated creativity, caused it to bloom — it made writing so fast and so easy, your thoughts and ideas flowed right out through your fingertips.

But in those days we didn’t have an Internet. There was no Google, no Wikipedia to look up facts and search for ideas and find new words for you. News was borne into your house on sheaves of paper laden with — yes! — ink. A game was something you played with another human being. If you wanted to communicate with friends from the comfort of your home, you called them on the phone. “Social” had to do with a club meeting or a cocktail party.

Wonderful as the Net is, as many amazing benefits as offers, it nevertheless presents a pernicious distraction. I find it almost impossible to get through a writing task — any writing task, or, for that matter, any editing job — without interrupting myself to cruise the Web, fiddle with the email, or relieve my fevered brain with an online game.

If anything, the ease with which you can barf out copy represents another assassin of creativity. Look at all that self-published stuff on Amazon: fiction and memoir and how-to and inspiration and rant and pop history and wild-eyed theories and this and that and the other are gushing like…dare one say it?…like a sewer. We pour out all this formerly unpublishable stuff, largely unedited. It appears on Amazon because no profit-making publisher in its right collective mind would take it to press. And we’re drowning in it.

The fact that you can toss out content without really thinking about it means…well, it means that what you’re tossing out is “content.” Not art. Not even real craft.

I don’t know that’s true. But I suspect it. 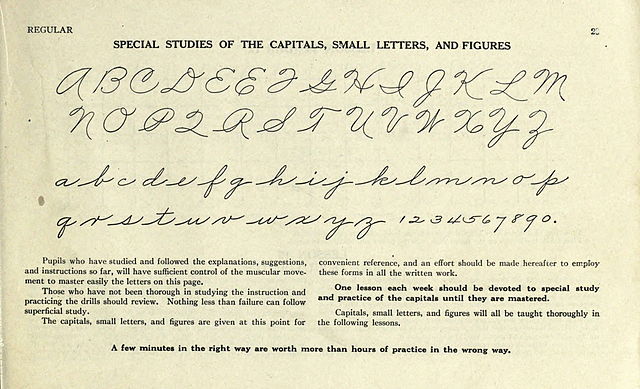 Writing with the Palmer method