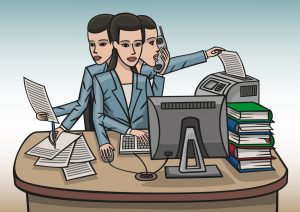 Your Editor at Work

Over at our parent company, The Copyeditor’s Desk, we’ve decided to shift our billing from a per-page to a per-word rate. Several reasons for this, not the least of which is it’s less confusing for the client (and for us) to charge by the word than by the page or by the hour.

But my associate and I beg to differ. Silly us, we think we should earn a living wage, albeit on the low end. Business executives who are accustomed to earning well and paying professional help well don’t even blink at our hourly rate — in fact, a couple of such clients have suggested we’re undercharging. But academics and creatives, who tend to live in starving-student mode long after they land full-time jobs paying fairly for their education and skills, have been known to faint when presented with a proposal stating an hourly rate.

• First, it’s hard to estimate exactly how long it will take to edit a lengthy, difficult project. Although I always ask prospective clients to send some sample copy, what they present is not always typical of the entire document. Also, some people require more coaching than others: they’re on the email or the phone all the time. So much so, in fact, that back in the day when we did charge hourly rates, I took to adding a flat rate for every email message I had to respond to!

• Second, it’s hard to calculate, fairly, how much time you’re really spending on the job. When you’re on a computer, you’re always multitasking — so from the outset the work pattern is gestalt. And then there are the constant interruptions, which exist whether you work in a business office or whether you’re working out of a home office. You’ll just sit down, and the phone rings or an urgent email comes in or the dog barks at some flyer-distributor messing with the front doorknob or whatEVER. This takes you away from the job for a minute or two — not long enough for the computer to register that you’re gone — and then when you come back it takes some time to refocus your attention.

Some of the content we work on is very complex, arcane, and difficult, often written by native speakers of Chinese. When you’re pulled away from that kind of subject matter and writing style, it takes a minute or two to figure out, again, what the author is writing about and how to say it idiomatically in English.

In a half-hour, 9:00 a.m. to 9:30 a.m., I’ve worked 15 minutes on the client’s project. Word’s time-stamped edits make it appear as though I’ve been reading the copy from 9 a.m. all the way through 9:30. A day or a week later, when I go to add up billable time, there’s really no way for me to know exactly when, during that half-hour, I turned away from the project to attend to some distraction. And since the distractions are so constant and so ditzy, I may not even remember that I spoke on the phone or answered an email during that period. So…I end up billing a half-hour to the hapless client, for 15 minutes worth of work.

That is not gunna make it.

So we settled on a per-page rate, calculated on a sliding scale: the more difficult the work, the higher the rate.

This insures that the client is billed only for the work we do, obviously much fairer and more accurate. But it also has some drawbacks.

The main drawback is that Microsoft Word has two default page margins. One, which resides in my Office 2008 program, is one inch top and bottom and 1.25 inches left and right. The other, in newer versions, is one inch all the way around. This amounts to a difference of about 10 words per page…and that adds up. At one point I realized that we were losing as much as 10% by applying our page rate to the newer format.

Also, some people will try to cheat us by setting the font size at 11 points or even at 10.5 points and by setting the margins at .75 or .85 inch all the way around.

This means that about half the time, even though I specify that copy must be set double-spaced in Times New Roman 12 point type with 1.25-inch left and right margins, I end up having to reset the entire document to fit our standard page and font size.

Charging by the word obviates that problem, as well as those associated with hourly billing. It’s fair to both parties — editor and client — and it’s easy to calculate. The project I just finished, for example, was 840 words, not counting mathematical expressions. It was set in 10.5-point Calibri with 1.25-inch left and right margins…probably imported from LaTex, or from a program that will convert a PDF into Word. But the format now is irrelevant: 840 words is 840 words is 840 words.

In some cases, such as the academic anthology we just finished, more than one of us works on the same copy. For example, I may read behind my associate editor, and we may have a contract employee do the eye-glazing work of checking and regularizing in-text citations and references. When we charge a page rate, we simply split the payment, shorting us both on the amount we really should earn for the number of hours we spend. By raising the word rate just a penny, I can charge enough to pay the two of us fairly without creating the impression that we’re demanding some outrageous figure. A cent a word adds about $2.40 per page: not an unreasonable amount, but it looks far less daunting when expressed in pennies.

So, we end up with something that looks  like this… 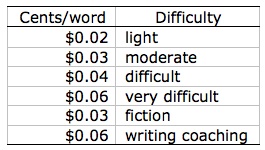 Ultimately the page rates are about the same — slightly less when calculated by the word, in some cases. But for the prospective client, the first table is simpler to read. And as a tool, it’s much easier for the person to situate his or her project within the framework of what we charge.

What system do you use to calculate your fees? Or, if you’re a consumer of editing services, how would you prefer to be charged?