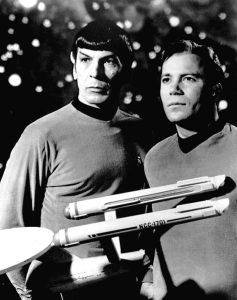 A query at Quora.com asked whether a story that contains one plot element “inspired” by someone else’s published work would infringe that author’s copyright. Although the new story, the contributor explains, is “inspired” by the first writer’s tale, the new fantasized world is entirely different.

I’m no lawyer, but I’d say this: if it’s not “fan fiction” —  i.e., a story that takes the  fantasy world, plot line, or characters from another story, such as the endless amateur Star Trek and Harry Potter spinoffs, this writer is probably safe. You can’t copyright an idea, and so it’s unlikely that s/he could be accused (successfully, anyway) of plagiarizing on the basis of taking one element and spinning off something entirely new.

However… You can copyright or trademark characters. Whatever you write — or produce in any medium that can be reproduced, not just in print but as film or audio or digital media — is automatically copyrighted the instant you put it in words. That includes Mr. Spock and Capt. Kirk.

Something that is based on pre-existing work is called a derivative work. In U.S. copyright law, the original creator owns the rights to all derivative works, unless he, she, or it has sold derivative rights to someone else. So under U.S. law, an author whose work “inspires” another work whose writer uses the same characters, the same setting, the same fantasy world, or the same premise can sue the copyright infringer for monetary damages and demand that the offending work in all its forms be destroyed.

Most authors don’t, for various reasons: lawyers and lawsuits are expensive; suing over infringement that doesn’t cost you a lot of money is a distraction from the work you’re doing now; and if the rip-off isn’t costing you anything in cash or reputation, it’s hardly worth the effort to pursue the offender. Apparently some authors and publishers regard fan fiction, in particular, as kind of flattering or think it directs readers toward the original author’s new work.

I once edited a budding novelist’s work that was almost frankly fan fiction: the characters were the same, only renamed, and the premise was roughly the same as the television show that inspired the client’s novel. And you may be sure I pointed out the resemblance and suggested that there was some risk.

Heightening the risk was the characters’ provenance: that TV show was long-running, wildly popular, and produced by a large network with deep pockets. Very distinctive characters can be trademarked as well as copyrighted. Whereas copyright is automatic, you have to proactively register a trademark. But if those characters are trademarked — which they surely could be — the creators could come after our nimrod author with a lawsuit that will knock her financial status into the Third World.

Defenses to such suits include fair use and constitutionally guaranteed freedom of speech. These laws are complex and nuanced — outrageously so. To defend yourself, you would need a sophisticated lawyer, and you would probably end up going to court.

Better, I’d say, to come up with something altogether original. The ego trip you’ll get by self-publishing your cool knock-off of Star Trek or Twilight or Fifty Shades is just not worth the potential pain.

So if you happen to google your book titles and come across a site like this one offering to give your ebooks away for free to folks who subscribe to a modestly paid “membership,” a) don’t panic, and b) DON’T sign up by way of getting a closer look at what the bastards are doing.

What they’re NOT doing is scraping your books from online retailers and giving them away for free. They’re not giving anything away, because they don’t have anything. It’s all fake. The whole idea of these sites is to get you to “subscribe” so they can capture credit card data, which they then use to empty your pockets.

On their pages, you’ll see Amazon’s details copied and pasted, word for word along with the cover image you uploaded, to which spurious “download” figures have been added. Often these figures change every time you refresh the page — and the number of alleged downloads can drop as well as rise. Evidently they use random number generators to come up with these silly figures.

We’re told there are a number of similar sites, some of which pretend to steal video and audio content as well as those that pretend to steal e-books. The one my friends and I found yesterday is based in Hong Kong (though registered with GoDaddy). We think they’re probably all over the world.

I’m not going to rehearse the whole adventure here, because I described it at Funny about Money this morning. So go there to read all about it!