Foreword:
A Word about the Translation and Interpretation

When the Cottrite Chronicles (Cottrite Codex 1.1–18.7) were recovered from a remote northern Vada cave in 2782 P.E., few researchers understood the extent to which they would forever change our understanding of the history and prehistory of our predecessors on this continent. As we have seen over the past three decades, these fragmentary journals, some of whose precious pages were lost in their very discovery, proved to be the key that unlocked the door to a remote past and revealed details of the lost civilization of the ancient Mercans, a culture whose complexity and sophistication had been hitherto unimagined. Perhaps as startling, the manuscripts provide an intimate view of the ice-age Espanyo and Hengliss cultures of the Great Lacuna, those tribal peoples who are our immediate ancestors.

The definitive translation of the Cottrite Codex appeared late last year under the direction of scholar and author Fontano do Caz Eviatád. The sponsors of that edition, the Western Regional Council of Research Sciences and the Institute for Theory of Intuitional Dissemination (TID) Studies, recognized early on that a direct, line-by-line rendering of Cottrite’s archaic language would be less than accessible to the general public. Given the wide interest in the discovery and its profound importance to our understanding of Methgoan culture and history, it was decided that a popular rendition should be produced, incorporating the best of current story-telling techniques. The Council announced an official competition to select the individual who would bring Hapa Cottrite’s narratives to the people.

Several outstanding story tellers received nominations for this challenging and prestigious role. Ultimately, Master Story Teller Estabanya Marcanda do Tilár i Robintál do Nomanto Berdo, of the Methgoan Academy of Written and Oral Performance, was selected. Marcanda do Tilár’s extraordinary output of realist and fantasist historical tales, including her acclaimed Forty Days of Holiár do Cortazín, recommended her highly. We believe the result of her seven-year collaboration with Fontana do Caz Eviatád fulfills all the promise of the heady excitement that characterized the early days of the Cottrite discovery.

The present volume, Fire-Rider, relates the events preceding and following Cottrite’s departure from Lek Doe with the Hengliss bands under Brez Lhored Kubna of Grisham Lekvel. Designed to show what life was like for men in the field, the narrative follows Kaybrel Kubna of Moor Lek, his associates, and his cousins through a summer’s campaign. It begins with the fall of Roksan, a crux in Kaybrel’s biography, and proceeds through events that, in the long run, were to determine the Hengliss tribes’ fate. The narrative’s details are based on Cottrite’s explicit relation of events he observed and stories he learned while among the Hengliss, and on intuitive-disseminative understanding of Hengliss history as deduced by the various scholars whose efforts are cited with Fontana do Caz Eviatád’s afterword.

Fontana do Caz Eviatád’s scholarly discussion of the Codex, which follows Marcanda do Tilár’s interpretive narrative, should not be missed by the serious reader. This important companion piece is the first article to discuss the manuscripts’ provenance, to provide an overview of the ancient Mercan culture, and to describe Espanyo and Hengliss life in the late Inter-Historical Era in a single document. What the Cottrite Chronicles tell us casts light on the events that led to the beginning of the Present Era, and they suggest that Hapa Cottrite himself may have played a role in those events.

The kubna Kaybrel of Moor Lek, dubbed Fire-Rider, was selected as a central figure for this first volume for several reasons. First, Cottrite seems to have felt a particular affinity for him, perhaps because they were both widely traveled and, for their time, learned men. Kaybrel of Moor Lek returned from his youthful journeys with a headful of pharmaco-herbal lore that earned him the title of tocha (“healer”), a shamanistic position whose considerable prestige and influence added to his already powerful status as tribal warlord. Of the many individuals Cottrite describes in his journals, the kubna Kaybrel stands out as the most nuanced, complex, and multidimensional figure. Second, the House of Moor Lek had an almost totemic significance for the Okan Hengliss, whose long-standing hatred of the Espanyo was fired to a vindictive pitch by the town’s destruction, approximately three decades earlier, at the hands of Roksando raiders. And finally, the kubna of Moor Lek clearly played a central role in the politics of the entire Okan stae’: cousin and councilor to Brez Lhored; cousin to Mitchel Kubna of Cham Fos; comrade and advisor to the future Brez Fallon Mayr of Cheyne Wells; friend to Jag Bova Mayr of Rozebek (destined to become the future Brez Fallon’s father-in-law and his most trusted aide); and chosen man to the powerful and influential Maire Kubnath of Silba Lek. In any of these roles, an Okan leader was positioned to make his wishes and opinions heard; occupying all of them, Kaybrel Fire-Rider Kubna of Moor Lek must have been a formidable presence.

Marcanda do Tilár’s interpretation of the Cottrite Codex attempts to communicate the loves and hates, hardships and joys, successes and losses of a distant people, and to show how their humanity touches us. The historical importance of the individuals depicted here is beyond question: had they not made the choices they did, innocent of their ultimate effect, the outcome of the Wars of Occupation might have been entirely different. The Espanyo-Mezgoan Unification from which the early Methgoan Polity grew might never have happened. Upon so little does so much depend.

The Board of Trustees of the Institute for Theoretical Intuitive Dissemination Studies
The Western Regional Council of Research Sciences
Seaside, Bahagalifone
2812 P.E.

Want to get the whole set, beginning to end, for your very own? The first six books are available at Amazon in Kindle “boxed set”…click on the image below to find it. 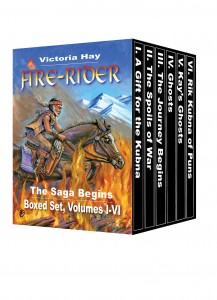 And the rest of the thing…