This riff continues the story of Lieze Mayreth of Rozebek and her husband Jag Bova, late dubbed “Snow-Killer” for his heroics after the Battle of Loma Alda.

At last the war bands have returned from their long and heartbreaking summer warfare. Their waiting family and friends greet those who have survived with joy.

Shortly after midday, Jag Bova’s bands of weary, road-worn men crested the pass through the low hills that rose above Rozebek Town. Larks whistled in the hilltop forest, and a squirrel, still busy stashing acorns and pine nuts for winter, chattered as the men hiked past them. A hawk drifted overhead, looking for all the world like idle curiosity brought it to watching the procession pass. 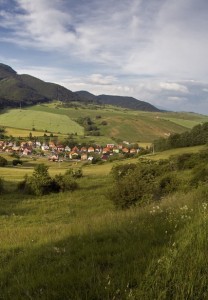 The autumn afternoon was clear and crisp beneath a sapphire sky, unblemished but for a few distant, fluffy clouds. Below lay farmlands, pasture, and the town of Rozebek, dominated by its mayr’s keep. In the orchards, apple and walnut trees had already dropped their leaves, but here and there a maple or a pear clung to its scarlet and gold.

When he saw the village spread out before them, Bova felt his heart rise. Narrow lanes led out from the town plaza like spokes on a wagon wheel, the spaces between them filled with stone houses built four and six and sometimes even eight to a compound.   Huddled together around common walls, the dwellings gained a little extra shelter from winter’s deepest cold. And there, wrapped within the village, stood his own home, Rozebek Keep. Its high defensive fortifications were built of local gray stone, as was his private family compound’s tower that rose above the stokhed walls.

Alone among the Okan aristocracy’s fortifications, the Mayr of Rozebek’s keep formed a part of its village. The people’s homes came right up to the moat, making the keep an island in a small lake of human activity. Usually a kubnath’s or a mayr’s keep and dwelling stood atop a low rise anywhere from half a mile to two miles from its village. This difference pleased Jag Bova. If anyone disapproved, they hadn’t ventured to complain. 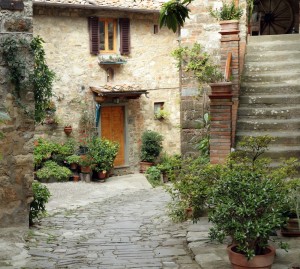 A fieldstone watch tower stood at the height of the pass. Three villagers came out of the door at ground level to greet the arriving fighters. The first, a wiry youth barely more than a boy and not quite a young man, fairly bounced up the road.

The men at the front of the line pushed forward, pleased to see the first of their kin and friends that they’d laid eyes on in five months.

“Would that be Rand the cooper’s boy?” Someone said. Another laughed in unfeigned delight. “You’ve grown a good three inches!”

Shortly behind the lad came a tall, lank, and wrinkled woman clad in rough-cut homespun pants and shirt, her grey hair straggling out beneath a knitted woolen cap. She advanced to Bova with arms extended and wrapped him in a hearty hug.

“Sister Belindeh,” Samel greeted her, accepting the next round of handshakes and crushes. “You’ll be doing guard duty now?”

An even more grizzled man hobbled after her, supported by a walking stick. “Where have you been, boys?” the old fellow exclaimed. “We’ve been waiting dinner for you so long the food’s gone cold!”

A ripple of subdued laughter murmured through the men within earshot.

“Where are my brothers?” Rand asked. “Are they with you, mayr?”

“Sure they are, lad” Bova replied. “They’ll be down the line a ways.” Rand made his way up the trail to find his returning relatives.

“And Willard? Did you bring my grandson back to me, Jag Bova?” Belindeh asked.

Belindeh and Willard spotted each other in the same moment and fell into each others’ arms.

“Getting all three of them back here alive and in one piece is more than a small favor, Sam.”

His monja nodded and smiled grimly.

“Tough campaign, was it?” the old man asked, overhearing this.

“Yessir, Mister Cammish,” Bova agreed. “That it was. You’ll be hearing about it soon enough. And all winter long, I expect.”

“I’m sorry to learn that, Jag Bova,” said Cammish. “How many men did we lose? If you don’t mind my asking?”

“Thirty-eight. That’s the ones who made it into the other world. More are coming home wounded. They’ll take some time to heal. Those that ever do.”

Cammish fell silent briefly, staring toward the town below. Then he said, “The boy has already ridden into town on his mule, a’spreadin’ the word that you men be climbing up the hill. Then he come back to greet you all, looking for his brothers. Listen to that racket down there!”

A distant sound wafted up the hillside: music. Horns and fiddles, drums and tambourines, whistles and ghitters and recorders and pipes rose a merry clamor down in the village.

Semel, Bova’s monja, grinned when he heard the racket. “The party’s started without us,” he said.

One of the other men overheard and added, “Let’s get our asses down there! Don’t want to miss any more than we have to.”

“Little Mama’s a-callin’,” another voice exclaimed. Here and there, men broke out of line and started to jog ahead.

“Get a grip on those clowns,” Bova said to Semel.

“Whoa! Settle down there!” Semel shouted. A few marchers, rowdy and not inclined to settle anywhere just then, gave him puzzled glances.

“Now listen to that, boys!” Bova hollered. His large presence got immediate attention. “The folks have brought out the band for us. What d’you say we return the favor?”

“What’ve you got in mind, Mister Mayr?” a grizzled fellow on the sidelines hollered back.

“Let’s play them a tune or three of our own,” Bova replied. “Let’s us get ourselves lined up here like respectable gents, and Semel, get the pipers and the drummers and let’s pipe the men to town.”

A ripple of laughter washed over the company closest to Bova and Semel. “That’ll give the girls something to remember through the winter nights,” someone remarked.

“That it will,” Bova said. “Into columns! Where are those pipers?” 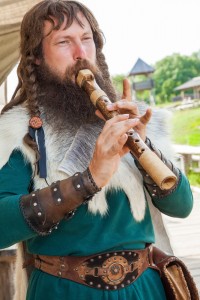 The bands began to fall into rough columns, and shortly two men with small bagpipes, a couple of drummers, and a fife player gathered at the head of the company. Meanwhile, Bova lifted bags of gear off his charger, loaded them on a pack pony, and climbed into the saddle. Semel scouted up company’s banner, unfurled it from its pole, and handed it up to Bova, who secured it to its saddle. It waved cheerfully in the crystalline air.

The pipers and fifer struck up a bright marching tune, and the men hiked down the hill, more spring in their step than had been seen for some time. The wounded rode in the supply wagons, a few, those who could sit up and speak, chatting with their comrades on foot. The mood overall: celebratory.

As the troops approached Rozebek Town, villagers poured out onto the road, where they danced to the sound of fiddles, drums, and horns. Women, children, and old men streamed into the band of weary, rag-tag men. Shouts of joy and relief rang out when families and loved ones found each other, but a few called out names repeatedly and got no response.

Soon enough, Bova found Lieze, Ada, and his three children proceeding up the road amid a knot of followers and friends. The instant Lieze spotted Bova, she ran through the crowd to meet him.

“Daddy!” Deke shouted. Ada grabbed him and Mandeh, who was about to bound after her brother. “Wait, darlings. Let Mama and Papa say hello to each other.”

Lieze wrapped her arms around her massive husband. He sank his face in her long chestnut hair, which she had allowed to flow loose for the occasion.

She hugged him tightly. “We’ve all been worried about you. Thank God you’re home and safe.”

He kissed her face delicately, then planted a passionate kiss on her lips. Nearby several men cheered. Lieze blushed and looked into his blue eyes. Bova took her hands and spun her about in an exuberant circle.

Ada approached with the three children at her side. “Welcome home, son,” she said.

Bova grinned and hugged his children’s grandmother. The three kids could no longer restrain themselves. Deke leapt on his father, who lifted him, laughing, into the air. Then Bova set him on the ground and greeted each child with a hug and a kiss. Mandeh and Deke chattered excitedly while Erysa looked on, dignified.

The party of townspeople drifted toward the town’s central park and cobbled square, where the music and dancing went on. After some time, Lieze began to lobby to return to the keep.

“We have a grand dinner for you, Bova,” she said. “A lovely lamb, and your favorite sweet winter squash, and two grand pecan pies. And we have so much to catch up on. Wait till you hear what the kids have been doing all summer!”

He smiled in frank pleasure. “What’s this son of mine been up to now?”

Ada said, “He’s started to learn his fencing. Lieze decided he’s getting big enough to start some lessons, so old Mister Cal has been coming to the keep every few days to work with him. Cal has been helping Mandeh and Erysa practice with the bow, too.”

“Is that so?” said Bova. “Well, those two could shoot a walnut off a tree. And as for you, Mister Deke, can you hold your own against this Mandeh?”

“Erysa brought down her first deer this summer,” Ada continued. “A fine young buck, enough to feed us all for three weeks!”

“You did? All by yourself?”

“Well, I was hunting with Mister Cal and Nida,” she said, referring one of her coach’s grand-daughters. “But yes, I shot it.”

Erysa smiled and executed an exaggerated but graceful bow.

“Why don’t we take you home now, Jag Bova?” said Lieze. “It’s time for you to sit down and put your feet up on your hearth.”

“I’m afraid we have some work to do first. “

“What can’t wait until tomorrow?” she asked.

“I need to talk with the families of each of the men who died while we were out this summer. There were almost forty.”

“You all go on home. I’ll be along after I’ve talked to their folks.”

“Bova, you can’t track down forty families and sit down and talk with each one of them, not this afternoon. It’ll take you two or three days to do that.”

“Dear,” Ada suggested, “don’t try to talk to them individually now. Most of them must have found out already. So why not gather them all in one place, pay respects to their dead, say a prayer, and then over the next few days you can go around to their homes.”

“That’s a good idea, Bova,” Lieze said. “It’ll let you show your respect now, and then give you more time to spend with each family. Later.” 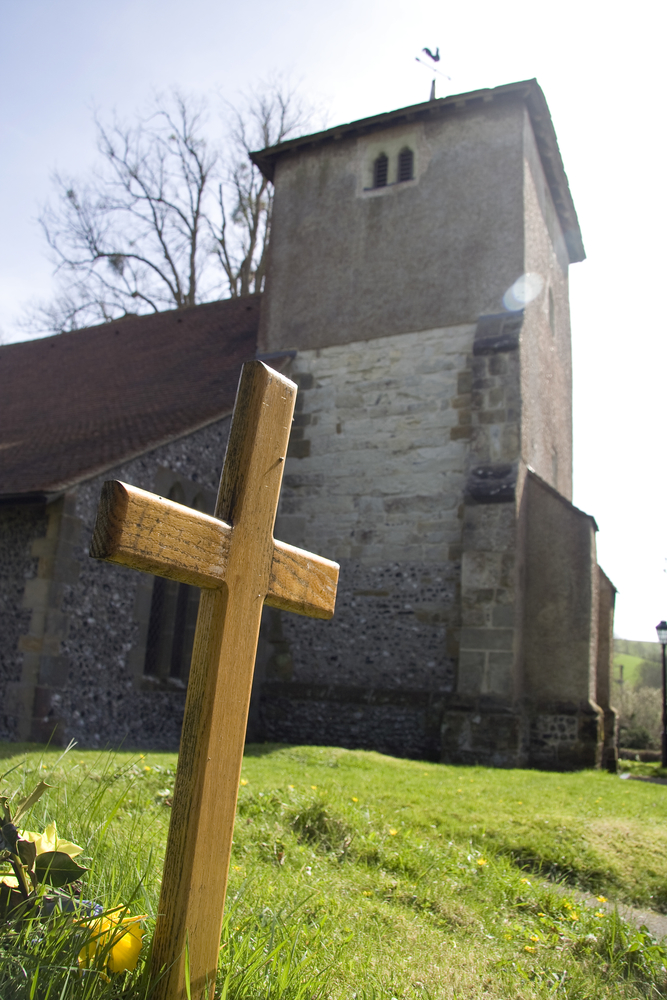 Escape into the Mountains
Women Warriors of the North
Seth
Banshee