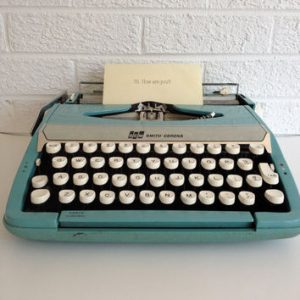 Are you old enough to remember the joys of the Smith-Corona portable typewriter? That cunning machine had a strategy to drive its users nuts: it would allow you to type a manuscript page calmly enough, normally enough, without too many hassles…until you got all the way down to the bottom of the page. That would entail, oh, about 300 words, if there were no heads or subheads, no indented block quotes, no lines of poetry, or whatnot. Around 1,794 characters, including the spaces. Not counting the characters that you had to type over twice using correction tape.

Then, on the very last line, some 23 double-spaced lines down the page, the paper would slip out of the platen and SCOOTCH up as you typed, causing the bottom line to bend and slide off the bottom of the effing page.

So you would get to waste some more time typing the entire damn page over.

Computers are like that. Only multiplied by ten to the power of 100. Like the Smith-Corona, computers have a malign intelligence. Only they’re much, much smarter than a portable typewriter. Whatever a computer can screw up, a computer will screw up.

The method I use is the one I use to derail spam and to organize statements from creditors: set up a separate “mailbox” in Mail (this is actually a “folder” or a “subdirectory,” depending on what brand of jargon you favor) and then write a “rule” (we call that “code”) to tell MacMail to send any messages from XXS to that mailbox.

Complicating matters, I belong to two Facebook groups and imagined that I would like incoming from each of those groups sorted into their own, separate “mailboxes.”

This was working well until my fingers slipped on the accursed MacBook touchpad. For those of you who are not Maccie, the Macbook inflicts a keypad that responds to “gestures.” Wiggle your fingers wrong on the thing, and you’ll give it some command that never entered your mind. Apparently that’s what happened…though we never did ascertain whether that really was the issue or what.

All of a sudden, no notifications of any kind came in from Facebook. Ever. Nothing. Nought. Zip. Radio silence.

I ended up having to reboot my computer from Time Machine to reset MacMail to a point before this little fiasco occurred. Were it not for DropBox, wherein most of my data reside, I would have lost four days worth of work!!!!!!!

Fortunately, everything was saved to DropBox, and fortunately I have an ancient iMac that can access DB…because engaging Time Machine did cause the MacBook to forget four days worth of content and to forget what the directory structure of DropBox looks like.

Needless to say, I got exactly nothing done yesterday. Unless you count wrestling angrily with a computer system as “something.”

I’d intended to finish today’s Ella’s Story episode so I could post it today. But by the time I got done untangling the mess, I was weeping with frustration and rage. Gave up. Went swimming. Fed the dogs. And went to bed.

Because Facebook has grown significantly as a part of my marketing schemes, and because a LOT of my friends surface there and a lot of back and forth goes on, I discarded the initial, commonsensical idea: Just let it go. Really, I didn’t feel I could afford to let it go.

Also, none of us knew exactly what was hanging up MacMail, or whether some other part of it would crash in the near (or distant) future.

This morning, after we deleted all the mailboxes, all the rules, and everything that had been done in any program over the past four days, Facebook messages are coming in, and they are (once again) being routed at random into “Trash” and into the regular “Inbox” (no, thank you, goddamnit!) and into the reconstituted “Facebook” inbox. As it develops Facebook has 87 gerjillion ways of fashioning its “return” address, so that it’s almost impossible to set up your system to bounce the junk out of your work in-box.

Some of us do not WANT to be interrupted every three minutes by yet another silly message about Donald Trump, dancing ducks, or fabulous new recipes. But that is not the point. Facebook makes its own goddamn self the point, whether you like it or not.

At any rate, even though the system is now working the same as it was before yesterday’s antics — i.e., “not well” — I still have not written today’s Ella squib.

I will try to get it up tomorrow. If I live that long. If I don’t have a nervous breakdown by then. If I don’t throw the damn computer across the room.

2 thoughts on “Four Steps Back for Every One Step Forward…”