It’s been awhile since I posted here, more out of laziness and general harassment than intent. “Upgrading” both my Macs to OS X El Capitan was a big mistake. It’s a buggy program and has almost disabled the little MacBook Pro — the machine I use most of the time because sitting at a desk makes the aged back hurt. A lot.

So bad is it that I’m seriously considering buying a PC to replace the laptop. Big step backward for me: I really, really don’t want to relearn Windows (ugh!), nor do I want to have to “upgrade” to Office 365 so as to work on a Windows machine.

Actually, though, getting a lightweight Windows laptop to use only for Word and Excel tasks would probably make sense. You can still buy a standalone copy of Office 2016, and it will run fairly trouble-free on Windows.

Not so much on a Mac. The reason I did not update to the latest operating system, Sierra (don’t those cutesy names aggravate you?), is that my version of Word will not run at all on Sierra. Neither will Office 2016, at least not without endless bugs.

And the reason I do not want to sign up for Office 365? How can I count the reasons?

Foremost are these three:

1. It’s a rip-off. Renting the damn program with a monthly payment will quickly cause the cost to add up — and up, and up, and up — to way more than the cost of a program resident in your own computer. I resent that more than I can say.

2. Much of the work I do is proprietary. I do not want to be working on my clients’ projects in the flickin’ CLOUD! Indeed, sometimes I have to sign an agreement that I will not allow anyone else to see the client’s research or to put it at risk of being seen by anyone else. Sticking some scientist’s paper on a Microsoft server could put me at risk of liability. Even if I wanted to do that. Which I don’t.

3. Functionality of documents created or edited in non-365 versions may be limited. So it’s questionable whether I’d even be able to work on a document using more than one of my computers, even if one were a Windows machine.

Truly, this is a mess. I don’t know which way to jump and am truly furious that Apple has turned my computers from “it just works” to “it just doesn’t work.” 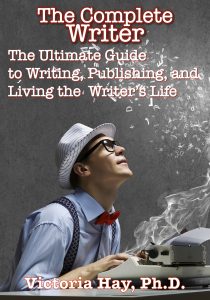 People in the audience wanted to buy the new book, The Complete Writer. It’s still in page proofs — I need to cut the back cover copy some and adjust the design accordingly, and need to check the second proofs AGAIN. But by the next meeting, I hope to have a carton of hard-copy paperbacks to tote out to the group.

Incoming paid work has…come in. Read about 17,000 words of academicese compiled by a pair of ESL co-authors.

These people hold me in awe. They’re required to publish in English-language journals. And they do it — with panache.

Can you imagine an American academic writing a dissertation or a scholarly paper in Chinese? Fat chance! It’s all we can manage just to stumble through a PhD program in English…and many US universities have quit requiring a second and third language for the PhD.

I could probably write a journal article in French and have it come out about on a par with what the Chinese authors produce in English. But folks…as an undergraduate I majored in French! Not in math, not in economics, not in communications, not in political science…. Criminey!

And as for the novel: ça va, lentement.

Weirdly, drafting scenes in ink with a real pen is one of the things that’s making me resent the computer hassles as passionately as I have come to do.

A pen and a piece of paper do not go offline. They do not crash and shut down everything you’re working on

Well, OK: the pen can run out of ink. But when it does, you do not lose any of the words you’ve just written. The two other documents you’re working on do not disappear into the ether. The spreadsheet you’ve been wrestling with does not lose an hours’ or a day’s worth of data.

You can carry a pen and a notebook around, and it will work anywhere you choose. You do not have to sign a pen and paper into a coffee house’s network, thereby rendering it and all your private information open to hackers.

Nobody is interested in stealing a pen and a notebook, so you do not have to lock up your draft behind a deadbolt or hide it under a pile of blankets when you put it in the back of the car.

You do not have to plug a pen and a notebook into anything. Their battery never runs out of juice.

They do not waste hour after hour of your time in techno-hassles.

And they never, ever, EVER need a new goddamn operating system!