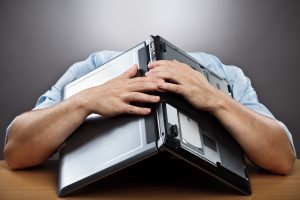 Gaaah! Have we been here before?

From the minute I bought this expensive new MacBook Pro with the accursed touchbar, I’ve been unhappy with the accursed keyboard. At first it was a kind of malaise that I took for discomfort with getting used to a new machine. It would pass, I thought.

Well, not so much. Soon I realized that I simply could not type a paragraph or even a sentence without sprinkling the copy with typos like pepper on a pile of French fries. What a mess! And why? What was wrong with me? Had I had a ministroke? First signs of dementia? What???

Finally it dawned on me: The new Macbook keyboard is a different size from the ones on the two previous Mac laptops I’ve had. The layout is identical — no change in the position of the keys. But the keys themselves are just a tiny bit wider than before. A fraction of a fraction of an inch…but there it is. And the keys are set slightly further apart. The result is that if you’re a touch typist, when you reach for a desired key in its wonted position, your finger misses and you hit not one but two keys.

Hence, if you try to type a word with the letter “e” in it, you get this: H3ence…. Type a comment in Facebook and it comes up littered with crazy, unpredictable errors.

And yeah: enter corrections or revisions in a client’s copy, and the same damn thing happens. And then you look like a friggin’ idiot.

But that’s not all. Because of the way they designed the keyboard by way of making the computer’s silhouette as skinny as possible, turns out sometimes a key decides not to work. In my case, it was the letter “b.” So every time I would type, say “bubble,” I would get “ule.” Cute, eh?

Well, the issue resolved itself before I could get in to the “Genius” bar, but it certainly did nothing to build confidence.

As it develops, Microsoft’s “Start” (Windows) button is read by the Mac as the “Command” key. The “Alt” key in Microsoftese is “Option” in Mackish.

AND…mirabilis!!!! As a bonus, the volume control buttons on the Microsoft keyboard work to control the volume. This frees you from having to fart with the damned touchbar — a true PITA — whenever you want to turn the sound up or down. Or off. 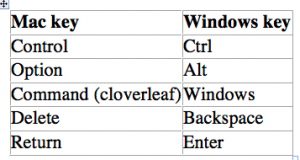 This means that the most common keyboard commands will run from a Microsoft keyboard. The “Windows” key is also called the “Start” key — on a Mac, it answers to “Command.” We’ll call it “Start” because that requires fewer keystrokes than “Windows” and is also somehow less annoying…

To my amazement, one really cool feature of OS X somehow works on this dusty old keyboard. That is, you can get a diacritical by holding a key down for a second, thereby evading having to look it up, tediously, in the accursed “Symbols” chart. Thus…

That’s a bit of a godsend when you edit academic copy.

Given the brain-banging cost of a new MacBook Pro, though, it’s pretty damned annoying to have to hardwire an antique Microsoft keyboard (using the ULTRA-ACCURSED dongle now required to make a USB connection) in order to have a keyboard that doesn’t scotch you up while you’re typing.

It’s not perfect — the touchpad is also a nuisance, made more so by having to use a separate keyboard. But it’s one hell of a lot better than having to backspace and correct a typo with every third or fourth keystroke.

Apple computers have a lot to recommend them. My son says the new Windows software comes with embedded ads (!!!!) to which you are subjected whenever you try to use your computer. Using a PC with a lot of anti-malware running is a lot like swimming upstream through molasses. And I’m sorry, but I would be fucking enraged if a computer decided to shut down, upgrade its OS, and reboot when I was in the middle of a project. As I happen to be most of the time. So far, the Mac inflicts none of these quirks on its users.

That notwithstanding…Steve, we miss ye!