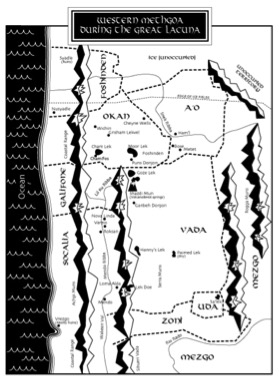 Map of Western Methgoa during the Great Lacuna

The degree to which a given habitation could be called a “settlement,” a “town,” or a “city” is largely unknown; most of the sites mentioned in the Cottrite Codex await discovery and excavation. It is believed that cowndees—districts overseen by a kubna—each possessed a relatively large town, with populations on the order of five hundred to as many as three thousand people; usually an Okan cowndee and its main town bore the same name. A mayr, on the other hand, apparently presided over a settlement or smaller town with substantial tracts of land attached to it, which were considered to be part of and politically subordinate to a cowndee.

Some Socaliniero habitations seem to have been larger than those found in the northern regions of Okan, A’o, and Foshinden. Archaeological excavations at Mendo, for example, suggest that during the Interhistorical Era the town may have reached populations of 10,000 or 12,000 people, some of them scattered in farming settlements near the walled city.