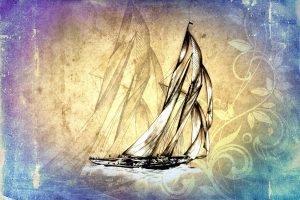 As you’ll recall, if you visit here now and again, awhile back my creative schooner ran aground on the shoals of ennui. I decided to try a new tack: write the backstory for a character that kept pushing herself to the forefront of the imaginative stage.

This scheme is working well, to my surprise. So well, in fact, that I’m beginning to wonder if the story is really about Ella, second-in-command to the Kaïna Rysha’s overseer, and not at all about her highness, Rysha Delamona, described by said overseer in a moment of impatience as ruler of “This, That, and the Other, not to Exclude the Whole Fucking Universe.”

I had conceived of this tale as an “Upstairs” story, one that would follow the exploits of an imperial aristocracy challenged not only by its own divisive intrigues but by the appearance of a mysterious alien entity.

But maybe in fact it’s a “Downstairs” story, following the exploits of a hard-bitten interstellar working and criminal class struggling to survive in the context of an aggressive imperial culture. Maybe the interesting stuff has little to do with the privileged, the wealthy, and the hereditary elite.

So far, we have about 6800 words, five chapteroids of copy that consist largely of flashbacks occurring while Ella is having a spate of insomnia. The next scene is clear in its author’s mind and likely to roll right along.

If this keeps on, I’ll end up with a whole story about Ella, Dorin, and the “Downstairs” crew, probably with rather little characterization or story-telling about the elite. That’s why I think maybe it’s a whole different story than the one originally envisioned.

At this rate, she was never going to get to sleep. Leaving the light off – none was needed, after all, nor did she want to wake anyone – she slipped out from under the covers, pulled on a robe, and padded barefoot down the cool stone hallway to the side entry at the far end of the women’s quarters. The door was alarmed, but she had a key and a code, which she used to let herself outside.

Zaitaf [Varnis’s largest moon] cast her argentine glow across the landscape that spread out before Ella’s restless gaze. What a thing, she reflected. Who would have imagined she would ever see such a place, pastoral and only half-peopled, much less live in it? Monochromatic beneath the moon’s platinum mantle, the broad pastures, the sturdy manor house – conservative but large and commanding – the gardens, the domesticated woods, and off in the distance the low mountains from which Skyhill took its name glowed like a painting limned in ebony ink on silver. Lovely by daylight, this evening it took her breath away. It wanted to fill her with love for the place. But it also stole other things away from her: her self, her loves, her past.

She gazed up at Zaitaf and wondered which of those gray patches on its face was Ethra. Could a person see Ethra at all without a magnifying lens? And . . . how was it possible that she’d been here almost 30 years? That she’d spent almost ten on Zaitaf?

Djitti had died a couple years after Ella was brought to Skyhill, recruited as Dorin’s second in overseeing the estate’s staff. Her daughter, now the Kaïna, was ten at the time. Not quite twenty when her father was assassinated. Five years Kaïna now, Rysha was.

How did all that happen between yesterday and today?

Bhotil [overseer on Ethra, the colony on Zaitaf] would be in his 90s now, if he’d lived. He had been good to her, helped her work her way up from the resort’s laundry to dispatching and then to supervising staff. She missed him.

Vighdi, shining bright in the sky. What was she doing now? Was she still on Zaitaf? Hell, was she even still living at all? Ella had no way of knowing, no way of finding out.

She jumped, startled out of her reverie. At the door, watching her with a half-smile, stood Dorin [overseer for the Kaïna’s estate, and Ella’s immediate boss].

“It’s after curfew. What are you doing out here?”

“Not much,” she said. “Just having a hard time getting to sleep. You, too?”

“Well, no. But opening the door sets off an alarm on my desk.”

“Oh, dear. I’m sorry. I thought my key would open it without waking you.”

“Well – at least it doesn’t wake the dead an all their kindred.”

He stepped outside onto the landing with her and stood gazing at the silver-plated landscape.

“Beautiful night, isn’t it?” he remarked.

Dorin stood quietly, his attention taken by the glowing scene. The moonlight picked up the silver in his hair and, to Ella’s eye, made him part of the show.

“So,” he said after a moment or two, “what’s keeping you awake tonight, Ella? Something on your mind?”

Ah. The talk-to-me gambit. She’d had the same steward’s training: social work and counseling. Maybe it was unkind of her, though, to suspect a “gambit.” Overseer, he was, but he’d also been a good enough friend to her.

She shrugged. “I dunno. Different things, I guess.”

He was quiet for a moment. The wait-’em-out gambit. She gave in. “The Darl business, I suppose. It’s just…a little much.”

“I suppose, yeah.” He waited some more. “No,” she added. “It’s not anything we haven’t all been through.”

“When you think about it…well, hell. Dorin. You and I worked like animals to get where we are. This guy comes along, this guy, and he just drops out of the cooker into the dormitory at Skyhill? I mean…how does that happen?”

A dubious glance. “When did you start expecting life to be fair?” He actually sounded a little surprised. And yes. It probably was…out of character. The man could spot bullshit a mile away.

“Not recently,” she admitted. He smiled distantly, gazing at the silvered landscape. At length she spoke into his silence. “It’s just that it annoys me. This is Bintje’s doing. If she hadn’t gotten herself knocked up, we wouldn’t have to be dealing with a new slave, and the paperwork and the damn blacksuits in our faces and the training and the headaches that go with someone fresh out of the cooker [a particularly excruciating type of punishment marking the transition between conviction for a crime and a lifetime of servitude].”

“Well. It’s not Bintje’s fault she got pregnant. She had the shot. You saw her get it. And you know the stuff doesn’t work a hundred percent of the time.”

“Okay, so Bintje brings home a belly, and the mistress decides…what? She’s going to buy a doctor for her? Why? The place is crawling with perfectly fine midwives.”

I have no idea. Who knows what mysteries lurk in the hearts of absolute rulers?