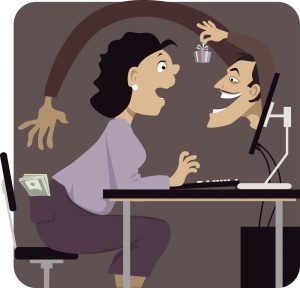 The ever-engaging New Zealand Muse draws our attention to this spot of light from Laura Jane Williams over at The Financial Diet. She shares some straight talk about the financial facts of life enjoyed by a #1 best-selling author — that would be one published through a real publisher (yea verily, a Big Four publisher) that pays a real advance. Without going into detail, let’s just note that she’s trying to support herself as a part-time nanny.

Now and again, I’ve held forth here about the multilfarious scams to which would-be writers are subject. One could argue that, for most authors, the whole publishing industry is a bit of a scam, at least for those who don’t understand their real occupation will not be “author” but “ad copy hack and self-employed marketer.” That’s most egregiously true for people who style themselves “indie authors” and self-publish on Amazon.

Very few writers ever make earn a living at their craft. Publisher’s Weekly, the sine qua non of trade journals for the publishing industry, reports that most authors’ earnings fall below the poverty line, and what is more, author income has been dropping since 2008.

Authorearnings.com reports optimistically that 1,340 writers earn over $100,000 a year, and half of those are indies. This revelation is extracted from a mind-numbing aggregation of data gleaned from Amazon. AE claims, probably correctly, that the share of the market for books sold on Amazon is increasingly going to independent (i.e., self-) publishers. This is no doubt true: “publishing” on Amazon is the hot new thing to do. But that you are in a market does not mean you’re making any money in the market.

1340 people: let’s think about that. It’s not very many, when you consider that Amazon has 14 million books online. If half of those six-figure writers are indies, then only 670 self-publishing writers in the whole world are making a credibly good living at their trade.

Amazon sold 22 million copies of Kindle books alone in 2010. How many authors are required to produce 22 million sales?

Between Amazon’s price-fixing practices and the enormous saturation of the book market, independent publishers and authors face daunting challenges. Getting a self-published book on the shelves of a real, physical store is not easy. The other day I learned that the pre-eminent independent bookstore in Arizona charges indie authors $300 for shelf space — and I can assure you, your chance of selling $300 worth of books there is almost nil. The sources through which real-world bookstores order their stock do not carry self-published books. You can get access through IndieReader and Ingram Spark…assuming you can afford to pay for it. Additionally, attracting media coverage from recognized mainstream newspapers, magazines, and broadcasters is extremely difficult: indie authors just don’t get no respect.

I’m often told that instead of clinging to my pessimistic view of life — the one in which one is never disappointed — I should try to be an optimist.

The optimist, then, would say about those 40 “successful” authors, Why shouldn’t I be one of those?

But I can’t get past the realist’s challenge: Why should you?