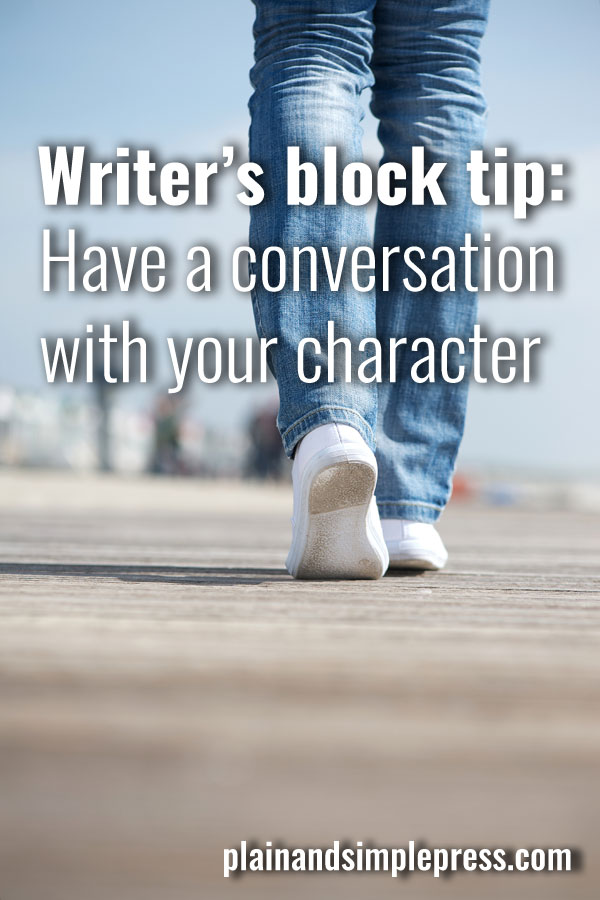 This is the fourth and last — and maybe the strangest — suggestion in a series of suggestions for dealing with writer’s block.

Have a conversation with one of your characters. Imagine that he or she can see you and is persuaded to speak with you, and ask for an explanation of some aspect of the person’s experience, thinking, or belief that you don’t understand.

[The time-traveling writer:] So. Would you tell me what’s bothering you?

[The protagonist:] I’d have to sit down and have a drink and think it over. [he  looks at her reflectively. he’s considering the possibility.]

Have some of this. [she offers him her boda]

[he takes a swig] That’s very nice. Smooth. What is it?

Ah. They do make some good liquor down there.

Well, take a seat and have some more.

[he thinks for another second, then decides to accept. he sits on a rock next to her and sips at the wine. then he passes the boda back to her.]

Care for some imp? [he pulls a pipe out of his vest pocket and begins to pack it with herb.]

Is it very strong?

No, this is mild stuff. Daytime smoke, hm? [he picks up a twig, lights it in the campfire, and puts it to his pipe.]

[she watches as he lights the pipe and inhales deeply. he smiles, holding his breath, and passes it to her. she takes a toke and hands it back to him.]

So. What’s eating me? I don’t know. Everything and nothing.

Does it have to do with the fight?

Of course. I don’t like to lose my men. And — well, Robin, that was pretty…pretty bad. Little Guelito, too — just a boy. What a… Well, it all seems so wasted.

There’s more to it than that?

I don’t know, woman. It’s hard for me to put my mind to it. I can’t really…it’s like I don’t have the words to explain it.

Well, would you try?

I don’t know. Nothing seems quite right to me any more. At the base. It’s as though everything that we…all the reasons that we do things? They’re wrong. Or they really aren’t reasons. Or there really aren’t any reasons at all. Do you understand?

Sort of. Like what reasons? What reasons that you do things, and why are they wrong?

Why are they wrong? For the same reason that there aren’t any ghosts. They’re just not true. I don’t think. . .I don’t think that a god who wants us to kill everyone around us, who wants to take our Brez — his son, hm? — to kill him at the end of a few years of leading us, I don’t think that’s much of a god. I mean, what kind of a god would do that? And what kind of a god would let people — no, make people — suffer the way they do? Why would a god give us sickness and pain before we die? Make us die in terrible agony? It just doesn’t…you know, I don’t think I can believe in a thing like that.

Does that frighten you?

No. I just thought… Well, I thought that was just the way your people explained things. It’s a pretty harsh world, after all — so there must be a harsh god behind it.

Well, it’s not a very good explanation, is it.

I don’t think so. But I’m not one of your people.

So. You can’t buy the Hengliss version of god. Can you buy that there’s a god at all?

I don’t know. There doesn’t seem to be much logic behind things, when you look at the world…that way.

No. It’s chaos. They say there’s order in chaos, though.

Some people who… Well, they died a long time ago. And whatever they said, it’s been forgotten. What about the Espanyo idea of god? Does that make any more sense to you?

Nope. Less. You know what they think.

It’s superstition. All the silliest blather. Ghosts and saints and three-headed deities in singing chariots and angels and devils — my god!

But maybe what the Hengliss think is superstition, too.

Hm. What about the Udanites? Do you know anything about their belief?

Yeah. It’s…different. But different doesn’t make it right. In fact, maybe the fact that they’re all different makes them all wrong.

I see. Is that the main thing that’s bothering you? A crisis of faith, as it were?

What does that mean?

That none of your religious beliefs — the things you were brought up to believe — seem to fit any more.

But is it the main thing?

This and the ideas suggested in my last three posts are only a few of the many strategies a writer may use to deflect writer’s block, revive the creative energy, and get on with the story.

What’s your weirdest or silliest strategy to deal with writer’s block?