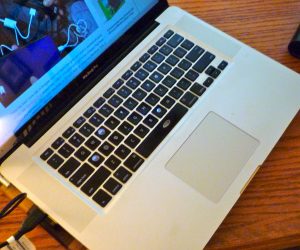 HOLY doggerel, Batperson! What a computer adventure yesterday! Went from day-before-yesterday’s ecstatic rave about the Mac’s talking narrator straight to the Ninth Circle. Digitally speaking, that is.

The trip was all my doing, like so many computerized adventures. Two portable external drives that I use to back up data had corrupted. The fix is simply to wipe and repartition them, which you can do easily on a Mac. I, being a  master of procrastination, naturally dawdled and delayed until I could dawdle and delay no longer. So yesterday I finally resigned myself to doing some work.

With the smuggest of success, I indeed did manage to reformat one of the external hard drives and set up Time Machine to restart its infinite backups. Problem is, when you have an internal drive that contains more data than Carter has oats, it takes a long, LONG time to establish the first backup. During that time, the computer drags painfully, kindly making work an exercise in frustration.

So I got up and went about some other business: watering plants, cleaning the pool, and generally farting around. I believe a bourbon & water was involved in the latter: user error #1.

Eventually I come back to the machine, plop myself down in my favored writin’ chair, and put the computer on my lap so as to continue the noveloid scene I’d been playing with. Looking forward to this, for a change: the past few hours had put me on a roll. A new character had come to life, and she’s the first in this book that I’ve really “connected” with imaginatively. Finishing the scene I’d been working on for days looked like a piece of cake.

Open the lid to wake up the computer, get the endlessly annoying “External drive was disconnected. Do not disconnect these things, idiot, without unplugging them in Finder, ’cause if you screw up on this you could damage the device.” The short cable I use to plug in the external drives is loose, so that every time you hiccup, sneeze, or pet the dog you elicit this effing message.

A-n-n-d…it interrupted the Time Machine backup and so shut down the process.

Shee-ut. So now I had to wipe the drive again and restart Time Machine.

Remember, the file I’m working on is open. It exists in various iterations in two places on my hard drive (user error!) and one place on DropBox (possible user error?). I save to disk but then go straight to wiping the drive, figuring I’ll come back to my project in a minute or two (user error!).

As I start to do this, I think…waitaminit: I’d better save the current items that matter over to DropBox because if I make a mistake, wouldn’tchaknowit, the thing that matters most to me right this minute will get erased.

This crosses my hot little mind as the Mac is wiping the contents of a large disk full of data, a process I find mildly alarming in the best of circumstances.

So, mildly spooked, I do a kind of panic backup: copy this, save there.

The system doesn’t like that. The backup crashes. I think fuck it and decide to re-open the file, work on my little fantasy for awhile, and then get dressed to go meet my friend for dinner and the concert we’d planned to go to yesterday evening.

So understand: while all this computer diddling is going on, I’m setting my hair so I can put it up, washing up, painting my face, shuffling through the closet in search of presentable clothing…and migrating back and forth from bathroom, bedroom, closet, mirror, makeup drawer to the computer screen. Yeah: user error!

Okay, so I re-open the file, ever-so-distinctively titled “chapter 1.docx.” Don’t do that, for cripes sake. Put something in your filename to distinguish it from the ten or fifteen other chapter 1’s on your freaking disk drive. User error.

Chapter 1 comes up…and it’s a version that’s at least a week old. All the work I’ve done over the past two days is absent.

I bang around and thrash around and I cannot find it. It’s not on DropBox. Whatever I saved to DB overwrote the copy that I’d been working on…deleting the stuff I’d written over the past couple of days. User error.

Word is set to auto-save every 5 minutes, because it habitually loses my clients’ work when I’m trying to edit a file that contains tables, Chinese characters, Hebrew characters or the like. But when I go to try to find a recent autorecover of the Great Novel of the Western World, what do you suppose I discover? WORD HAS NOT DONE AN AUTORECOVERY SINCE MARCH 21!!!!!!!!!!!

So the file that contains the last DAYS of work is GONE. And what’s gone is the most productive and lively copy I’ve managed to gag out for this book since I started.

Check autorecover: the settings have not been changed. No notice to the effect that the hard drive didn’t contain enough space ever popped up. Nothing. I am just screwed! I don’t know what TF is going on but suspect it’s not user error!

Sumbiche. So I emit an electronic wail of dismay and post it to a private Facebook forum I subscribe to, as just about the only way of venting I can think of short of throwing the effing computer through a block wall. It’s now exactly 5:00 p.m. and I’m supposed to be in my friend’s driveway picking her up for our night on the town. Slap on some lipstick, grab a credit card, and fly out the door.

By the time I get back, several hours later, a number of people have posted replies at this forum. One kind person remarks, gently, “Think I heard once upon a time DropBox retains revisions? Might be something there.”

Uhhhh…. Hmmm…. Yeah. Come to think of it: a year or so ago, my business partner managed to retrieve a whole set of “disappeared” files that one of our journal editors removed from DropBox, thinking she was doing us a favor. I had remarked to said Editor that mine is the free version of DB and so in due time we should remove completed articles from our shared folder, so as not to run me past the space limit. She took that seriously, and so she dutifully removed a bunch of stuff that neither my associate editor nor I had downloaded.

Well, Associate Editor is smarter than the average snail. She actually knows how to operate DropBox, and she was able to retrieve not only all the “disappeared” files but a record of who had disappeared them and when. So…there may be something to this…

Click on the DB icon, sign in, and find, by golly, instructions for how to recover a disappeared file: 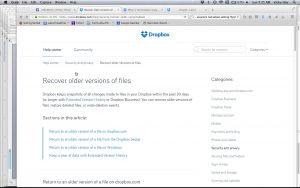 A-n-n-n-d instructions on how to recover a disappeared file on a Mac: 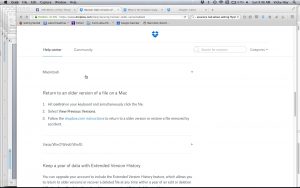 This latter entails one (1) simple keyboard command. And…damned if it doesn’t work! Command + filename brings up 23 of the most recent pages of draft drivel, just as they were when User Error lost them!

Well, not quite just as they were: they appear in some sort of html-ish format: 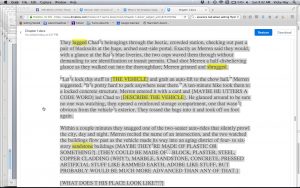 But click on “download,” and mirabilis! The thing appears in perfect, uncorrupted(!) Wyrd format, complete with the infelicitous rhymes and the notes-to-self and the puzzling over what on earth (or…uhm…not on earth) this place looks like… (Click on the images to come close to seeing the details.) (No, WordPress will not let you post a screenshot in any way that makes sense, not that I’ve been able to figure out.) Best of all, this file contains the passage I was writing at the time I contrived to disappear the file: not one word is lost!

It was well after 1:00 a.m. by the time this little miracle manifested itself. I staggered off toward bed to the sound of angels singing.

So upset was I by the fiasco at hand that I had not one but two panic attacks driving downtown last night, scaring the bedoodles out of my friend, who nervously offered to take over the chauffeuring job. Felt considerably better after two margaritas and a plate of hummus. Enjoyed the concert. Was pretty relaxed (heh) on the way home.

By the light of day, I’m thinking it would be good to overcome one’s cheapskate instincts and spring for the cost of DropBox’s premium service. That file recovery function is one helluva value-added feature. I’ll continue to alternate two or three external drives to back up the Mac’s software and data in Time Machine, thereby providing some protection against ransomware. Andthe extra space on DropBox will hold data files that I can’t afford to or don’t want to lose.

It’s $9 a month for the low-end subscription, and only $13 a month for the “Standard” plan that lets several people share its functions and archives files for three months. That plan gives you 2 terabytes of memory, which is twice as much as I need to back up my entire system, programs included, with TimeMachine. Unfortunately, its apparently not configured to work with TimeMachine. But it still would be worth $360 a year to have key files archived for 120 days.

Who would’ve thunk that making a living at writing would involve so many hours at deploying computer and IT skills that you never wanted to have in the first place? Please. Give me back my typewriter!

And, if you enjoy watching the abhorred writer’s mind work, here’s a CLICK! moment that just struck, right this very minute:

Day or two ago I was thrilled to discover Amazon’s new DIY cover-building tool. Would that or would that not free one of an enormous amount of hassle? Well. No. it just occurred to me that you can’t assign an ISBN until you have the cover art. If you build the cover art on Amazon and store it there (presumably preventing you from downloading it until after you’ve uploaded the MS, if at all), then you can’t assign an ISBN TO THAT DOCUMENT!

Well. I’ll have to see if you can build a cover and download a JPEG or PDF of it. Otherwise it’s back to trying to build the p0rn covers in Powerpoint. It can be done, but the result will probably be less than optimal.

But what that will mean is…YES! More dorking around online, more time spent on trying to figure out something I never wanted to know to start with and shouldn’t have to know (I are a English major, dammit, I are NOT a artist!), very likely to no avail. In short: MORE WASTED TIME THAT SHOULD BE SPENT ON WRITING.

Today I want to try to upload the cookbook direct to Amazon, without benefit of an ebook builder. Supposedly this can be done, but I’ll believe it when I see it.

A cookbook of course contains many lists of ingredients. Lists pose a formatting problem when it comes to converting to .mobi and ePub files.

For that reason, I’m not trumpeting publication of this thing yet. Because I don’t believe it’s going to get published today. I suspect I’m going to have to go back to the e-book builder guy, pay him to do the conversion right, and wait several MORE weeks while he does it.

At this rate, everything I write will be published posthumously.