Lohkeh was waiting when Haidar delivered her to the first-floor entrance to the cave-climbing offices. His face lit up as though he were overjoyed to see her.

“Are you hungry?” he asked, after Haidar transferred her to his custody and left.

“Wouldn’t mind something to eat.”

“That’s good. I’ve arranged for dinner.” He gestured her into the waiting aircar. This would be a mid-“day” meal. They hadn’t been gone anything like a full waking cycle, though Ella was ready for something to eat.

Slaves who did heavy physical work were offered their largest serving of food at the start of a workday, the theory being that they profited by front-loading calories and nutrients. A second decent meal came at midday, and then a selection of snacks or light meals after work was done.

Convenient, she thought: next time she was sent to this place, she would know how to find the mess hall and when it served up real food, as opposed to nibbles usually set out to those allowed to graze during the day.

“Hop in.” Lohkeh aimed a gesture at the vehicle, whose door slid obediently open.

Not so convenient: the place wasn’t part of the office structure. Maybe there was a separate living structure? Or more likely, she figured, more likely they built the food line closer to the mine workers who did the heavy labor.

The vehicle switchbacked its way up several tiers that climbed the sides of the cavern-like walls where the concrete-faced buildings clung.

“Here we are,” Lohkeh said as the car slowed to a stop near a small, nondescript door.

This was puzzling: no sign of a large dining hall. It must, she thought, be dug out of the rock. 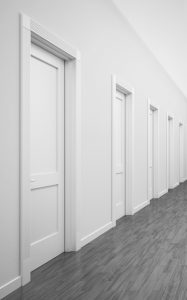 But inside, she saw no entrance to any such space: just a corridor leading left and right, parallel to the external wall. Doorways, all closed, all featureless, marched along the interior wall, evidently indicating separate, small rooms.

“This way.” He led her up a set of steps to a floor above. The stairwell was partly lit by dim light seeping through abbreviated exterior windows and mostly lit by glow panels lining the inside wall.

They made their way past a long row of narrow exterior windows and undistinguished interior doors. Once they’d stepped inside the hallway, the noise from the machines and workers was fully blocked. The space was almost eerily silent.

“Here’s the place.” Lohkeh stopped before one of the nondescript gray doors, and held the back of his hand to a lockpad. His coded chip recognized, the flat door slid open.

What? She stared in wonder.

The windowless room behind the door, neither a closet nor a large salon, held a generous complement of comfortable furnishings. In one corner, a pair of lushly padded easy chairs flanked a small black table, a silent vidspot on the opposite wall. Electronic paintings – or images of paintings – adorned the walls, inviting the occupant to contemplate exotic and peaceful places: planetside Varnis, she assumed, without knowing for sure. Their colors broke up the shadowless white of ceiling-to-floor glow panels. Meditative notes from some kind of stringed instrument played softly, and a thick carpet covered the floor from wall to wall – unheard of in Ella’s parts.

A spacious bed stood along the wall at right angles to the loafing chairs, and in the center of the room a table for four held plates of food kept warm under bubble-shaped glass covers. A bottle of the same deep amber whiskey she’d admired at Lake Vesiah stood on the table, too, along with a couple of glasses.

“My lady,” Lohkeh performed an elegant obeisance by way of inviting her into the room. “Your dinner awaits.”

“This…” she had to restrain herself from gasping, “is for us?”

He set a gentle finger to her lips and winked. “Come on in, sister.” He pulled out two of the chairs and they each took their places at the table.

Surely, he was still in the life, and yes, surely he was a capo.