So some weeks back (make that months?) I decided to give myself a little break from the Ella story. That break morphed into a brake…as in dead stop. How can I express how much I’d like to and yet would not like to get back into the writing swing of things?

Today, for example…. Okay, said I, Let us create a SCHEDULE. There’s nothing like a list, nothing like a scheduled set of tasks, to make yourself do things, right?

Lordie! I can’t even work up the energy to start making any such schedule. So tired am I, at 11:31 a.m., that I can hardly hold my head up. All I want to do is bolt down lunch and go back to bed.

What have I done today?

The best I’ve done so far is to reflect that part of my problem with Ella is that the Ella story has no plot. It was, after all, enough of a challenge to present two stories running in tandem, one in real time in one as flashback. The matter, however, is much complicated by the fact that one of these story lines does have a plot (sort of) and one is pretty amorphous.

What IS a plot? Let us discuss that in another post: I’m too tired just now to build a reasonably clear explanation of what plot is and how it works. So…later, with that. As with all things in my life just now, apparently.

So yes: I do know approximately how the 12 stages of plot direct Ella’s experience on the alien moon of Zaitaf. Except that her story is rather more complicated than Vogler’s formula for genre story.

Therein may lay the problem: possibly the plot is too complex. Possibly I need to rethink it and simplify the action. Maybe progress is being blocked because the brain just does NOT want to do the work required to choreograph the characters through that dance.

What I need to do, I guess, is fit the amorphous into the…morphous: into a plot outline that can direct the action. This will relieve me of having to think so hard about where things are going and how the story unfolds. All that will left to do is…well…unfold. 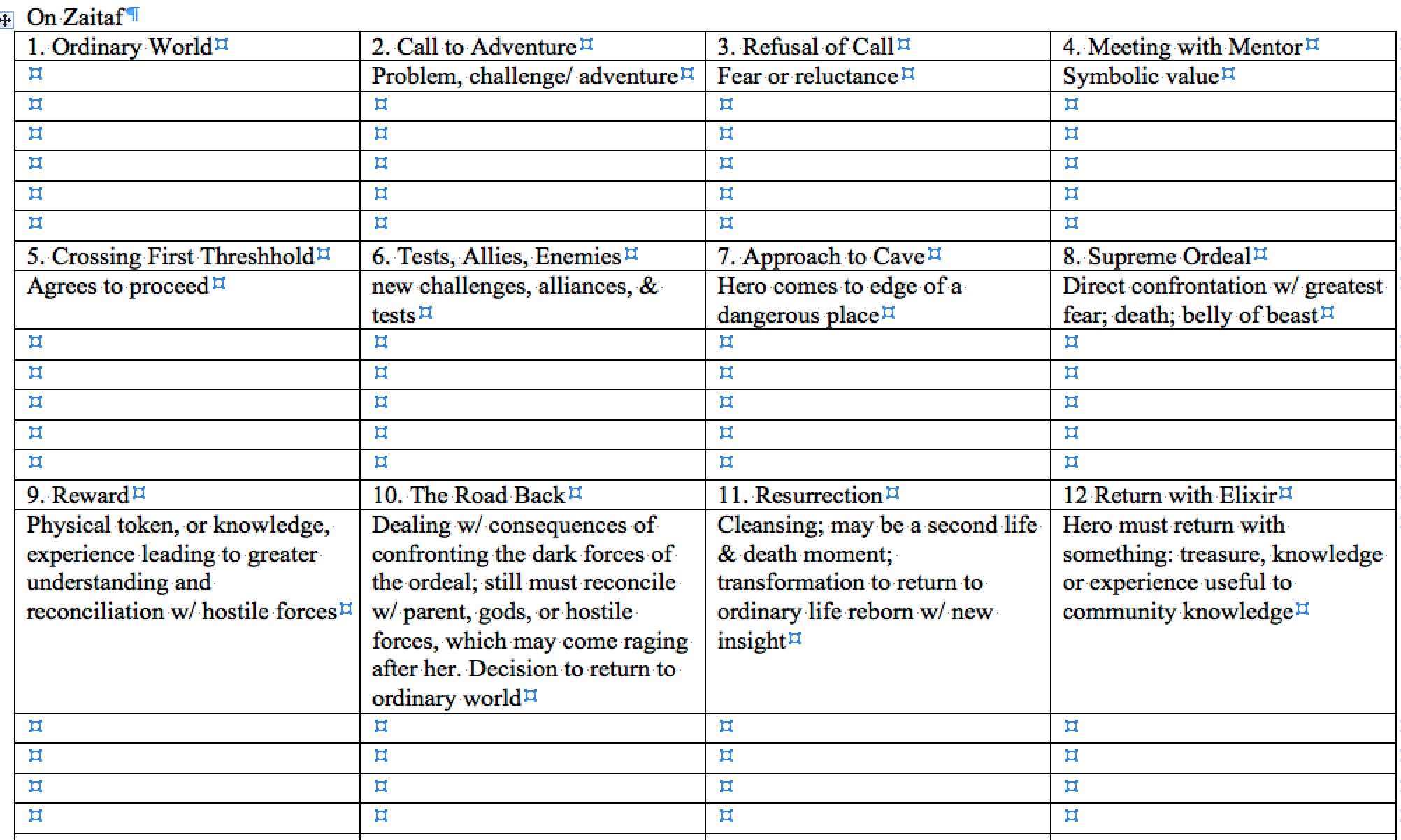 Plot is the structure of a piece of fiction. When you write nonfiction, you’re building something similar to the fiction story’s plot: an organized narrative with a beginning, a middle, and an end, whose fact-based rising action leads to a high point and falls off in a resolution. It is, in a word, your work’s organization. A fictional work has—or should have—much the same kind of structure.

In fiction, plot is driven by conflict. Any conflict: could be between two or more people, between a person (or persons) and an external force (Man vs. Nature!), between conflicting emotions within an individual . . . any number of things. But conflict there must be.

Conflict moves the rising action from the beginning of the story up through one, two, or even more difficulties or calamities (often called turning points or complications), until the story reaches its climax. At that point the action is resolved into a dénouement, sometimes called falling action, that leads to the story’s end. 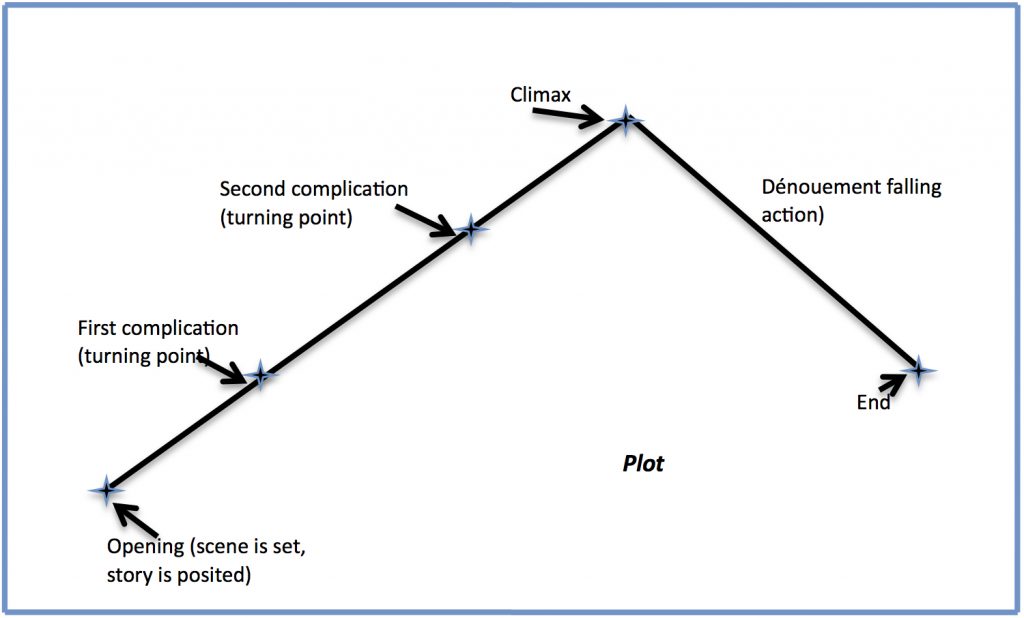 So here’s a question: do you write down a plot outline and dutifully follow it, or do you juggle your story’s direction in your head?

And, as long as we’re posing questions, if you have a written outline, what format does it take?

Some people—many of them prominent writers—claim they have no set outline, and that a piece of fiction seems to take form on its own, as it’s imagined. Others—also prominent writers—insist they must have a formal, carefully written outline, which they follow from beginning to end. Until recently, I tended to hang with the latter group.

For the current fiction enterprise, though, I got in the habit of sketching out ideas for coming action in notes at the end of a chapter in progress or in a separate Word document. It helps for remembering little insights and bright ideas.

But it’s not very efficient.

Recently it struck me that one of those Word docs full of ideas and notes was beginning to resemble a plot outline. So…now I’m about ten chapters in to what probably will be a 25- to 30-chapter novel. The ten chapters in hand aren’t in order—there are gaps, and they represent several subplots.

Those gaps and uncertainties, I suspected, could be wrangled with notecards. This makes it possible to shuffle chapters around, to move them from one section of the line of action to another, and to add or delete items easily.

I ended up with something that I called a “timeline.” It’s not exactly a plot outline, at least not yet: at this point it’s just a rough chronological arrangement of imagined events. The events in the timeline are narrated in the chapters.

One stack of notecards represents parts of the timeline. Each card shows what chapters are related to that timeline—presumably indicating approximately where they should appear in the finished manuscript, if not in what order. A timeline notcard also lists the subplots that would play out in those chapters: 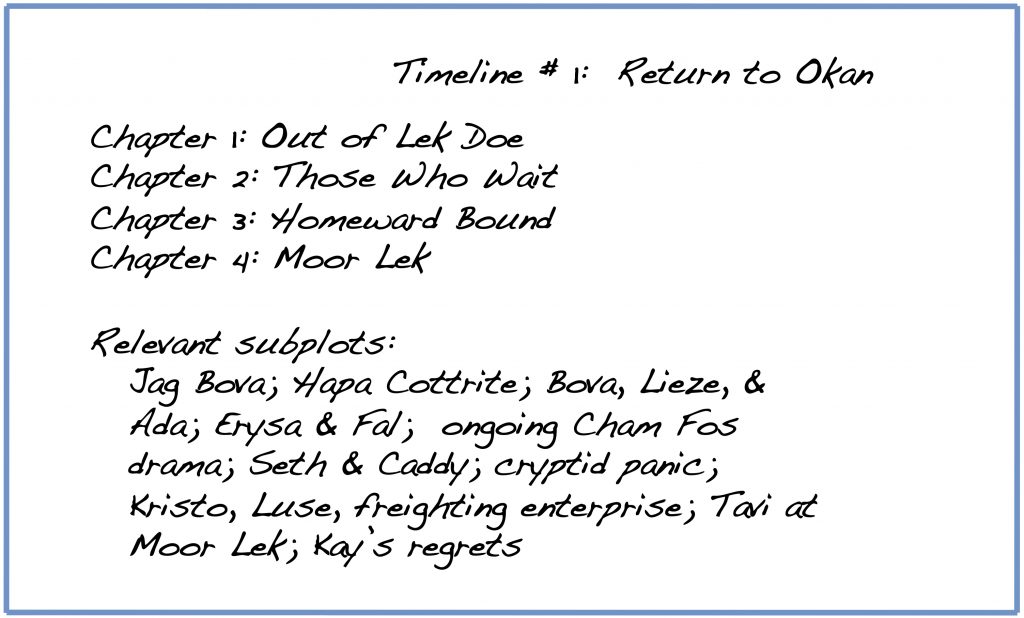 In another stack, each notecard is dedicated to a specific chapter. 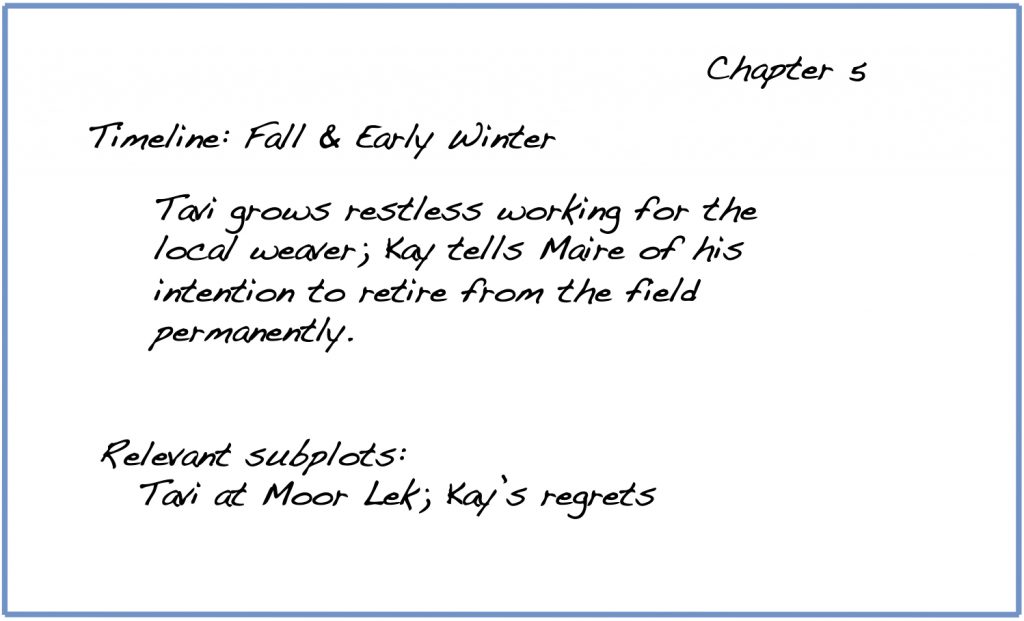 Exactly how well this will work for any given writer remains to be seen — by the writer. If it interests you, try it and see if it helps you to organize your scenes, chapter, and plotline. At the least, it should make it possible to keep track of a plot whose complexity seems to be running amok. At the worst, I doubt if it can do much harm!