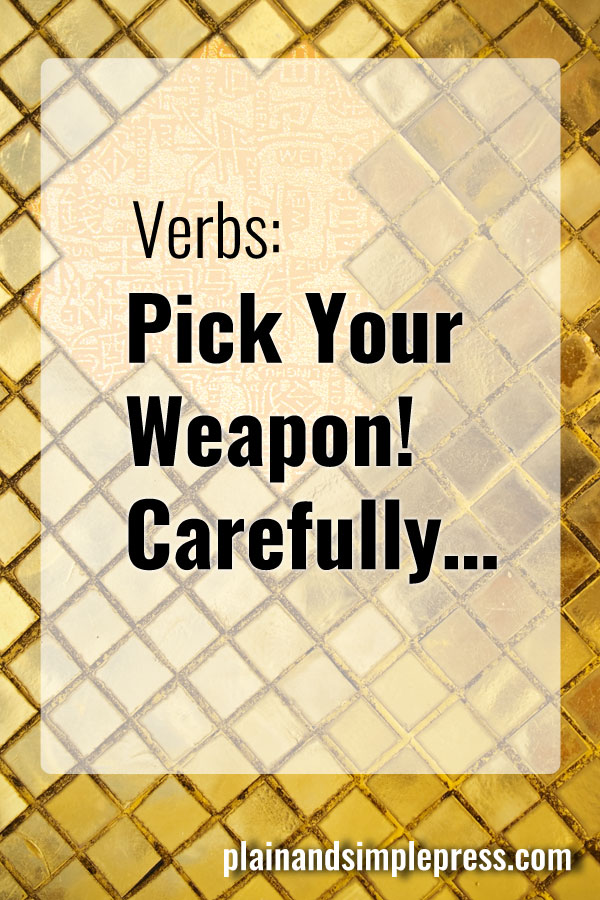 With permission from the author, I’m going to share a few phrases from one of my favorite clients. This material comes from a chapter of a novel set in the Antebellum South.

• Spring was on the verge of turning into summer in East Georgia.
• The sun was changing from pale yellow to a more intense incandescent hue…
• The sky was changing from a pale blue to a deeper shade.
• Life seemed more vibrant and pulsating…
• …sounds and scents grew stronger.
• Hawks floated silently in the sky,… searching the earth below for dinner.
• Dogs could be heard, some near, some in the distance, barking and yelping, adding their measure to nature’s strange cacophony…
• …cats, like the hawks aloft, simply moved about stealthily, preferring not to announce their presence but rather to strike by surprise…

A lot could be said about these fragments of description. But let’s focus on one aspect of the copy — possibly the crucial aspect: its verbs.

As you know, a verb is a part of speech that expresses the action going on in an utterance. In daily speech, we tend to be fairly loose with our verbs: we use verbs of being to form unnecessarily verbose turns of phrase (“she was of the opinion that” when “she thought” would do the job faster and better); we cling to the passive voice (“mistakes were made“); we use vague or bland or squishy terms when a stronger verb would get the idea across more directly, more clearly, and more memorably…oh, we could go on and on.

3. Instead of a verb + an adverb (a word ending in -ly, or other modifiers of action such as rather, somewhat, quite, and the like), try to pick a verb that carries the meaning of the action plus the adverb. For example: instead of “she walked slowly across the campus,” try “she ambled, she strolled, she meandered, she plodded, she wandered, she dawdled….”

Uh huh…isn’t that enlightening? Well…let’s see if we can make it enlightening by applying these principles to Author’s gilded words. With a little alchemy and those six tips, we can turn that chapter from gold-plate to 14-carat.

Spring was on the verge of turning into summer…

Zzzzzzzz…snort! Oh, sorry. I dozed off there.

Why is this sentence such a snoozer? Because Author missed his chance to engage a vivid, strong verb. Instead, he brazenly flouted Rule 1 and inserted a bland, pablumesque verb of being (was) plus a verbose prepositional phrase (on the verge) plus another verbose prep phrase (of turning) plus yet a THIRD prep phrase (into summer).

What does on the verge of mean? Maybe “about to”? Spring was about to turn into summer. That’s a little bit better. But boring. Still. Booooring.

Some of these possibilities are better than other. “Spring was bleeding…,” for example, might work despite its whiff of the purple because this chapter portrays people in slavery. “To verge” is a little rarified — I personally would avoid it. To my ear, “was shifting” sounds like a Ford Fairlane with four on the floor: jarring in the context. “Merge,” “blend,” “melt”: any of those might work, and any would improve on “was” + prep phrase + prep phrase + prep phrase.

Hot dang! This is looking better. Much, much better. Two minor edits — pick a strong verb and put it in a simple instead of a progressive tense — and now we have a pretty arresting opening sentence. And I like the “bleed” verb a lot better. It’s good. Very good.

All right. Let’s remember de Maupassant’s rule: never use the same word twice on the same page. So: we’d like to get rid of at least one of those changings, without getting too “elegant” about it. And as we can see, we have a Rule 6 issue, too: was changing is in in the past progressive. Kill.

The “changing” choice is painfully bland. Dull. Vanilla’s nice in vanilla ice cream, but folks, we ain’t makin’ ice cream here! How was it changing? What result did the change effect?

Any of these would likely do. The second has brevity to recommend it. The third strikes me as fairly evocative; so does the second. But whatever: any one of them improves on “was changing from.” So would “the weather was getting hot.”

Trying the process on the second example:

Oh dear. Georgia had rock bands in 1855? Probably not. What can we do with this?

For starters, let’s get rid of the quasi-verb of being, seemed. Then let’s convert the adjectival participles to verbs:

Uhm…ohhhkaayyyy. I suppose. Or maybe not: brings to mind some sort of alien blob, doesn’t it? It Came from Outer Space! But it does boil three words into one: seemed more vibrant to vibrated; [seemed more] pulsating to pulsed. None too felicitous, though.

Love those sesquipedalian words! But…unless you have a good reason to emit them, maybe you shouldn’t. The narrator here speaks in the voice of a highly educated Black man. He can get away with the the adjectival participles, and he surely would have the word “emanate” at his fingertips. So…maybe. But would anyone really say that? Maybe not.

Hawks floated silently in the sky,… searching the earth below for dinner.

All right. I mean, sort of OK. “Floated silently” demands two words when one will do. “Searching the earth below” feels like a dull way to anthropomorphize a raptor. Hawks do not have breakfast, lunch, and dinner; they grab what they can get and bolt it down when they can get it. Hate that. It annoys me. Fix.

My favorite image for a raptor or avian scavenger “floating in the sky” is “ride a cold column of air.” Don’t recall where I stole that turn of phrase: probably from Wallace or Page Stegner or maybe from Scott Momaday. Whatever: don’t use it. It’s red-hot. Can we try to come up with an image of our own? At the very least let’s look for something that means “floated silently.”

Enough of that. Don’t just sit there: come up with something of your own. You’re supposed to be a writer!

Dogs could be heard, some near, some in the distance, barking and yelping, adding their measure to nature’s strange cacophony…

Passive voice!! Plus a convoluted series of participles, plus a sesquipedalianism. Oh, Lord, spare us, thy hapless readers…

• Dogs, some near and some distant, barked and yelped, adding their measure to Nature’s steel-drum beat.
• Dogs near and far barked and yelped, adding…
• Barking dogs harmonized in a raucous chorus, sending up a sociable racket that no ears could evade. (Note the infelicitous rhyme here — in a real revision, it would disqualify this effort. The image of the evasive ears is a little weird, too. Remember: it’s usually better to kill than to add words. Thus… “Barking dogs near and far sent up a sociable racket that no one could evade.”)

...cats, like the hawks aloft, simply moved about stealthily, preferring not to announce their presence but rather to strike by surprise…

Tacking adverbs onto a feeble verb does not make the feeble verb any less feeble. Write that on the blackboard 100 times!

Of these, only “stalked” strikes me as reasonably felicitous. In a single word, it evokes “moved about stealthily,” and it also takes an object (prey), reinforcing the hunter simile between the cats and the hawks. Keep. Throw out the other two.

Notice that often one’s attempts to revise will yield something almost as terrible (oh heck: make that “even worse”!) than the first effort. The business with the raucous chorus ( 😀 ) and the ambulatory ears is probably the most laugh-inducing example here. This is why the writer plans on revising and editing several times, not just as the work progresses but in at least one go-through (preferably two or three) from beginning to end. Specifically on the subject of verbs, though…

Here’s the thing, my loves:

The verb is the most powerful weapon in your writer’s arsenal. Some verbs are .22s, some are .38s, some are .45s…and so on. Pick the weapon that fits your purpose.

In general, try to use something stronger than a BB, but to avoid purple prose, don’t pull out a cannonball until it’s called for. When writing description, select some mid-range calibre, so it sounds like you’re speaking plain English even though the verbs are carrying their full weight in meaning and imagery.