The Weirdness That Is AdSense 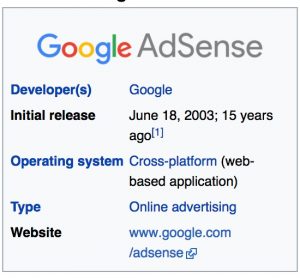 I used to enjoy exploring the mazes of Google AdSense’s labyrinthine reports and policies. Every now and again, one would see phenomena that were truly mysterious.

One of the things AdSense could do was to identify the type of computer used to access a page. If you selected “Performance Reports” and then clicked on “Platforms,” Google would tell you how many views of your site were made by people with desktops, mobile devices, etc. This still amazes me. It creeps me out: who needs Google spying on users in quite that much detail?

Over the one week, for example, Funny about Money readers viewed 563 of the site’s pages with “high-end mobile devices.” Some of them apparently clicked on ads, since they generated a couple of bucks that week. The first time I discovered this blandishment, a few people had been accessing the site through their mobile gadgets, but none rose to any advertiser’s bait. Over time, though, some of them began to bite.

Meanwhile, 5,005 pages were viewed from desktops. Unclear whether a laptop is regarded as a “high-end mobile device” or whether a MacBook (for example) is included among desktops.

Equally unclear what is meant by “unmatched ad requests,” a line that appears on the “Platform” page. Whatever it is, it can’t be very significant: it always registers “0.”

AdSense kindly includes a sort of glossary with its reports page—it’s really an agglomeration of FAQs, I think. Look up “unmatched ad request” and you get the answer to some customer’s question about why this item appears in his reports:

An ad request is counted each time your site requests an ad to be served, even if no ad is returned. Unless your coverage[1] is 100 percent, you will have more ad requests than matched requests (ads that are returned and displayed on your site), resulting in some unmatched requests.

Some reports have columns that are meaningful only for matched requests. For example, the Targeting type report shows how ads displayed on your site have been targeted. When an ad request is unmatched, there are no ads to consider, so the request has no targeting type.

This is why unmatched requests appear in a separate row.

Moving on, the Biggest Mystery of AdSense is why some days and some weeks vast lucre (oh, say, $1.95 a day!) comes pouring in, and at other times pay is in pennies. For a few weeks, FaM would crank more pennies than usual (in the dead of summer when readers should be vacationing at the beach!). But shortly thereafter it wouldn’t turn enough to get AdSense off its duff to send a payment. I never did, for the life of me, figure out what I was doing (if anything) to cause AdSense revenues to increase in some weeks and flatten out in others.

It does seem as though spikes in revenues may increase when you discuss certain topics. For example, one spike occurred around the time I was holding forth about credit cards. A bunch of ads for banks, credit cards, loan sharks, and the like came up (at least, they did on my computer—apparently these things are tailored according to what Google can see of your browsing habits as it spies on you). Maybe ads from well-heeled institutions pay better . . . that is, maybe Google charges ING more than it charges some local air-conditioning or pool company and then passes a few pennies of the profit along to the site publisher?

That would explain why some bloggers create whole sites devoted to nothing but discussing credit cards. Boring, but profitable.

AdSense occasionally performed moderately well for Funny about Money. Not well enough to retire to the Côte d’Azur, by any means, but well enough that if I could just be certain it would behave that way all the time (it did not!), the S-corporation could have afforded to buy me a cell phone.

AdSense is much like adjunct teaching: catch as catch can.

[1] For an incomprehensible definition, check this one out: https://support.google.com/adsense/answer/92360

Image: Shamelessly ripped off from Wikipedia.