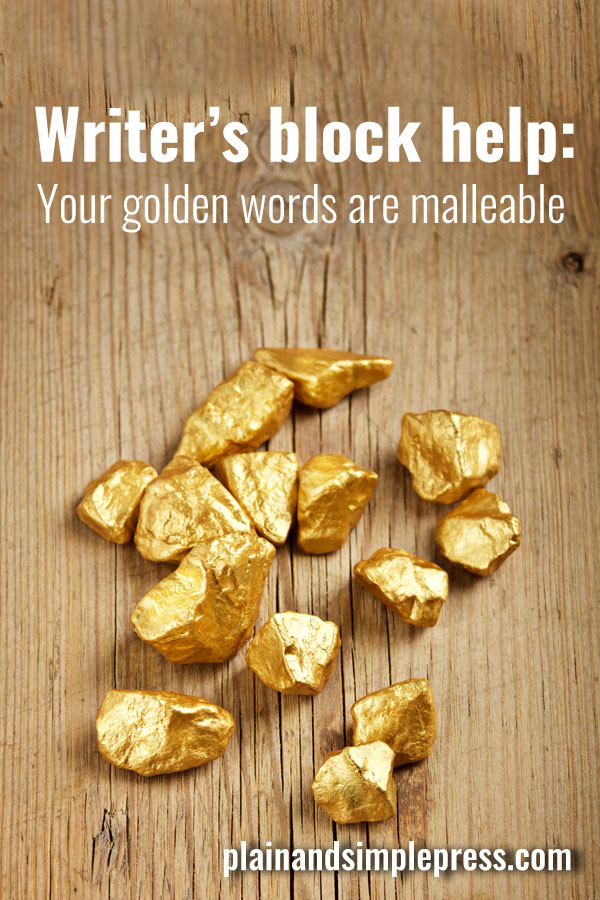 This is the second installment of a four-part discussion of ways to handle writer’s block. The first post appeared yesterday.

Remember that gold is a soft metal. Your golden words are malleable — NOT graven in granite!

Regard what you’ve written as draft at all times. Never stop revising. And be aware that it’s a lot easier to revise and rework than it is to choke out brand-new creative content. Just get it down on paper. Or on disk. It doesn’t have to be perfect. Not the first time around, not the second time around, not the third time around.

Knowing that you can always jimmy the copy, add to the copy, cut the copy, totally change the copy makes it a lot easier to get something out.

Just write it, and don’t worry if it isn’t perfect.

It should feel good, Kay thought. Watching this happen should feel good. He ought to feel back-slapping, hollering, falling-down-drunk happy, or at least for God’s sake like raising a swig of whiskey to the moment.

He and his cousin, Mitch―Mitchel Kubna of Cham Fos―stood atop a promontory, just a low butte, actually, about a hundred feet tall, and surveyed the battle’s aftermath. Fallon, still clad in his leather chest armor, saw them climbing up here. He followed and joined them a few minutes after they stopped at the bluff’s edge. When he reached the two, he shook Kay’s hand, punched Mitch on the shoulder, congratulated them on a fine day’s work.

And the men had done a day’s work. Together the three looked out over the scene. Hengliss allies―Okan and A’oan marching under the Okan brez, Lhored Kubna of Grisham Lekvel―had taken the town in three weeks flat. It was an incredible feat. Roksan, the principal city of their principal enemy, should have been impregnable. But they had shown it was not. Now the men, scruffy irregulars, most of them, pressed into duty by the obligations of their betters and not because they knew much about soldiering, spread over the plain before the burning town’s gate. No one down there seemed to suffer any qualms. Their noise reached the hilltop as unruly hubbub like a huge outdoor party gone too far in drink. Men laughed and shouted, a few surviving women squealed as the boys had their fun with them, horses and wagons rattled around. Guys compared plunder, traded booty―some had set up open-air markets to trade or sell the loot they’d carried from the city before the heat pushed them out.

A brown and gray pillar twisted upward toward white clouds that galloped before a chasing wind, and Kay knew the smart breeze would keep those fires going until they had done their job. The place would burn to the ground before they smoldered out. The flames would leave a pile of ashes, maybe a few blackened rafters, charred bricks. And scorched bones.

Fal, wiry and saturnine, his dark beard and mustache trimmed as if to cut down wind resistance, offered his boda to the two older men. They accepted the liquor cheerfully. The drink passed between them while they gazed at the scene below.

“Must do your heart good.”

“How long has it been for you?” Fal asked.

Fallon Mayr of Cheyne Wells rarely gave himself over to speculation. If on this good day you had asked him how the Hengliss tribes came to see themselves as one being, a living organism whose limbs and body and soul formed a single piece—or even if they did—he would have laughed. He would direct your attention to the pillar of smoke twisting skyward where Roksan burned, and he would turn your question obliquely around. He would ask you, then, had they not, the bands of Okan and A’o fighting as one under the Brez Lhored Kubna of Grisham Lekvel, had they not done a fine thing?

He passed the lambskin flask that was making the rounds among several companions to Jag Bova Mayr of Rozebek. Bova, a chunky flaxen-bearded northerner whose heft made Fal’s long, wiry frame look slight by comparison, lifted the boda in a friendly salute, swigged its unrefined contents as though he were taking a deep drink of water, and passed it to Kristof Mayr of Oshin.

“That was one hot maneuver you two pulled inside them gates,” Robin Mayr of O’a remarked to Fal. A slender, muscular young man with a smooth chestnut-colored beard, he accepted the boda from Kristof and lifted it vaguely in Fal’s direction.

“Mostly Kay’s idea,” Fal said. He shrugged as though he’d had little to do with the swath they’d ripped through the defenders in the long chaos after the Hengliss had breached the enemy city’s entrance.

“Bull!” said Jag Bova. “He couldn’t have done it by himself. And I’ll tell you—when he takes them kind of ideas into his head, I’m sure as hell glad I’m not the one who has to fight on his flank.”

Fallon laughed with the others. But he was glad, too, that it wasn’t Bova. He wouldn’t have traded his place at Kay’s side for any honor the brez could dream up.

“He had his reasons for going after the bastards like that,” Kristof remarked.

“Must have felt damned good,” Robin added. “If it’d been me, I’d have tried to squash every cockroach I could catch.”

Even where they were standing, a mile away, heat from the fires burning the sacked Espanyo city reached them. It took the chill off the cool air that drifted down the distant snow-covered Achpie and Serra peaks flanking the wide bottomland along the Wakeen Ribba.

“Ain’t none of ’em gonna crawl out of that place no more, no how,” Robin agreed. He passed the drink back to Rozebek.

Bova raised the flask to that, and they all murmured their appreciation of Robin’s whiskey-laced profundity.

“There goes your kubna with his cousin now,” said Bova. “Looks like they want to get a view of the doings.”

By “your kubna” he meant Kaybrel Kubna of Moor Lek, the man to whom Fal, Robin, and Kristof owed their first loyalty. The cowndee of Rozebek belonged to the house of Puns, and Jag Bova served its kubna, Rikad of Puns.

They watched Kaybrel and Mitchel Kubna of Cham Fos stride through the festive troops gathered on the plain before the burning city. Kay was carrying his leather helmet in one hand, his silver-streaked hair flowing loose around his shoulders. To Fal’s eye, he looked tired, but the others didn’t see that. The two kubnas cleared the mob and headed toward a low butte that rose above what had a few hours earlier been a battlefield. They disappeared around the side of the promontory, seeking the gentle rise up the hill’s backside.

“How long has it been for him?” Robin asked.

“What? Since Moor Lek fell?” Fallon read meaning into Robin’s question. “I think he said…no, it was the kubnath who said that. Maire said it was twenty-eight years ago this spring.”

“Twenty-eight years! She wasn’t even born then, eh?”

“Neither were the rest of us,” Fal replied, and what he said applied to everyone there but Jag Bova, the only man among them to have reached his early thirties.

Lordie! I must’ve been listening to Willie and Toby singin’ Whiskey for My Men when I scribbled that version.

I’ve found that every time you rewrite a scene from beginning to end, it improves. Often, even very small changes — a turn of phrase here, a gesture there, a detail or a word choice — have a large effect.

Have you had that experience?

1 thought on “What to Do about Writer’s Block? Part 2”