Lost in space, of course… 😉

Seriously: it’s been one frustration after another in the Creative Department. I’ve been cranking my way through chapter 30 of Ella’s Story, verrryyy slowlyyy, as one interruption after another falls from the heavens, like meteors upon the dinosaurs. Some of those interruptions have been paying work, which you may be sure supersedes all other demands and cravings. Others have been various little personal crises — surgery for skin cancer that turned out (surprise!) not to be skin cancer (please, can we max out the stress and drama a little more?); the dog at death’s door but refusing to go through; one unholy doggy reaction to one unholy medication after another (three times, I thought that dog would die before day’s end); friends dying right and left; a week or ten days’ worth of pool renovation going on in the back yard; editorial jobs flying in over the transom; and of course the unceasing sideshow that is our national politics, a constant and constantly amazing distraction.

Last week as I was trying to wrap up the chapter, in came not one but two new assignments within a few hours of each other, both from Chinese authors. One was a doctoral dissertation in, of all things, accountancy.

Who knew accountants did Ph.D. dissertations?

This, while not especially lengthy, was difficult to read because of the annoyance factor: they were making the kid emit an elaborate covariance analysis to prove…the obvious. The thing went on and on and on, essentially saying the same damn thing 15 ways from Sunday and demonstrating…nothing, really. Other than the obvious. It was an exercise in pointlessness.

By the time you removed all the tables and the references section, you ended up with a magnificent 29 pages of narrative. I mean…say what?

This, from my point of view, added another layer of annoyance. My dissertation was a full-length book that contributed a whole lot of new information based on months of archival research and that was published by a major academic press in its field. And you may be sure that my first full-time academic job did not start in the five figures, as his will.

So I leave Ella up in Word as I plod through this thing.

Then as soon as I shovel that back into the ether, I have to turn to the other author’s project: Chinese math. Transmission of HIV through certain high-risk groups in Guangzhou…don’t ask. Turns out to have been quite short, adding another layer of annoyance: I should’ve done this writer’s project first, because I was able to move it off my desk in a day. Better to have returned it promptly than to have made this person wait while I plowed through 28 pages of pointless palaver.

Math papers sent to American editors from China are commonly written in a program called LaTex, then converted in a crude way to Word with the equations stripped out. This, as you can imagine, occasionally creates an unstable file. And yea, verily…

The minute I wrapped that damn thing up and hit “save” for one last goddamn time, it crashed Word! Everything went down, including the Ella’s Story file I’d left open.

Infuriatingly, Wyrd is set to save every five minutes on this computer, because of its propensity to crash at the most impossible times. So even if I hadn’t manually saved to disk, it should have auto-saved…many times over, during the several days I was working on the customers’ papers.

Wyrd is supposed to back up to what is called an “autorecover” file. If you know how to get at it, you can find the most recent autorecover and that will contain most of what you’ve done. In my case, it would retrieve everything done up until the previous 5 minutes.

But n-o-o-o-o-o-o-ooooooo, No chance. I can NOT find an autorecover file with the passage I wrote and felt so smug about.

I brought the computer down to the church office, which normally is quiet as the tomb, figuring I could sit here in the silence and, if not reconstruct what I’d written, come up with something new.

At the risk of repeating myself: n-o-o-o-o-o-o-ooooooo! The phone has been jangling nonstop. People have been wandering in and out the door, most of them wanting nothing more than to chat. EVERYBODY on the clergy and the staff is here this afternoon, meaning they’re all here to receive calls and try to dodge time-sucking visitors.

An hour and ten minutes to go. Then I have to fly home, bolt down a few bites of food, feed and wring out the dogs, and then turn around and fly back down to the church for choir rehearsal.

I’ve done almost nothing on the Ella opus — certainly not try to reconstruct the lost passage, except to realize I can’t remember any of it — and obviously there will be no time for any of that this evening.

Just hope my dog is still alive. That’s about the best I’m up to…hoping the dog hasn’t croaked over yet. 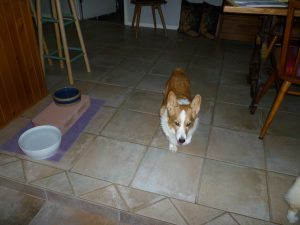