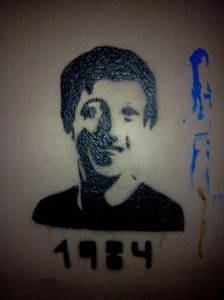 Graffiti in Berlin of Facebook founder Mark Zuckerberg. The caption is a reference to George Orwell’s novel Nineteen Eighty-Four.

Actually, I’m not exactly quitting. I’ve been thrown off for “hate speech”: remarking that public restrooms for women are often filthy. Of course, as with most social media, there’s no way of reaching a human being or appealing the CopBot’s judgment.

My long-haul trucking friend Connie — one of the few women in the business — was going on at Facebook about unisex bathrooms at truck stops. She remarked that when on the road, men’s bathroom habits tend to  be (heh) execrable. Many truckers, for example, are given to defecating into a plastic bag or urinating into a soda bottle and throwing the waste out the cab window onto the road’s shoulder. Unisex bathrooms, she reported, are uniformly filthy because of similar habits brought indoors.

I replied that women’s bathrooms are filthy, too, and for the same reason — and that it’s the proprietor’s responsibility to keep the facilities clean.

Only you can see this post because it goes against our standards on hate speech.

Women are slobs, too. I’ve been in amazingly filthy women’s rooms. Problem is that the proprietors need to be required by law to keep the facilities clean.

How amazing is that?

As ridiculous as it is, nevertheless I deeply resent it and indeed consider it to be slanderous.

Later this afternoon, in comes yet another machine-generated e-mail from Facebook, noting that I seemed to be having difficulty signing in and instructing me to “click here” to sign in with one click. That instruction returned me to the profoundly mistaken and insulting slap in the face above.

Many of my friends have already left FB because of the Cambridge Analytica fiasco, which made it impossible to pretend Facebook’s intrusiveness somehow wasn’t there. I should have left then, too, when I could do so with some dignity. I’ve stayed though, partly out of inertia, partly because it is nice to stay in touch with friends scattered around the country, but largely because Facebook has been my main marketing tool for the P&S Press books.

But y’know…it’s not a very effective marketing tool. And it’s not the only game in town.

More effective marketing? Get off your duff and go give public presentations. Write guest columns for magazines and newspapers. Pay Kirkus to review your books. Make yourself an expert on your subject matter and tell people all about it.

Sitting at home with your feet up while you tap away at a keyboard is just…well…not effective.

Shortly after I published 30 Pounds/4 Months, a diet guide and cookbook, I decided to run a Facebook Ads campaign. A friend who was busily making himself an expert, too — on amateur book marketing — insisted that this was the way to go!

Accordingly, I hired a marketer with glowing reviews of her Facebook expertise. Fantastic sales were guaranteed. We created the Plain & Simple Press and The Copyeditor’s Desk Facebook pages, and after she put them online, we launched a Facebook Ads campaign.

She was sure we would see a sharp spike in Amazon sales.

Along comes the first revenue report from Amazon.

Not only is there no spike, sales went dead flat after the FB Ads campaign went up! On the day our campaign went live, sales dropped off sharply. Then: nothing. Literally, not one sale.

She couldn’t believe it. Surely that couldn’t be possible! I surmised she thought I was trying to get out of paying her, so determined was she to believe that this state of affairs could simply not be true.  Not until I sent her PDFs of the Amazon reports did she believe me.

So…as a marketing tool, maybe it works for some people. But if you’ll do a little googling, look around the Web, check out a few YouTube videos on the subject, you’ll learn it doesn’t work for a lot of people.

I should have left a long time before this. Facebook is as hypnotic as online games. You get engaged with it, and you can’t quit gazing into the cobra’s eyes. Truly, it has become a dreadful timesuck. This morning I rolled out of the sack at 4 a.m., and with nothing much to do sat down in front of the computer. Next time I lifted my eyes from the screen, it was 6 o’clock!

Two hours blown away, with no more awareness of it than if ten minutes had passed.

Well, first, I’m not going to rejoin Facebook, even if the hard-copy complaint I’m snail-mailing to their Menlo Park HQ gets a rise out of a living entity.

Second, I’m probably going to join Medium, where, a few posts at a time, I will move the *FREE READS* chapters, once I get a feel for how the platform works. I may post chapters for one of the books at LinkedIn.

Third, I’ll join some new groups and offer to give presentations by way of letting people know these books exist.

And fourth, I’ll pitch ideas for guest columns to various publications around town and around the country. Weekly newspapers, in particular, are holes in the office floor into which to pour copy; editors are thrilled to find writers who can compose a simple sentence.

What I am not going to do is have anything more to do with the intrusive, privacy-invading, and arrogant likes of Facebook.