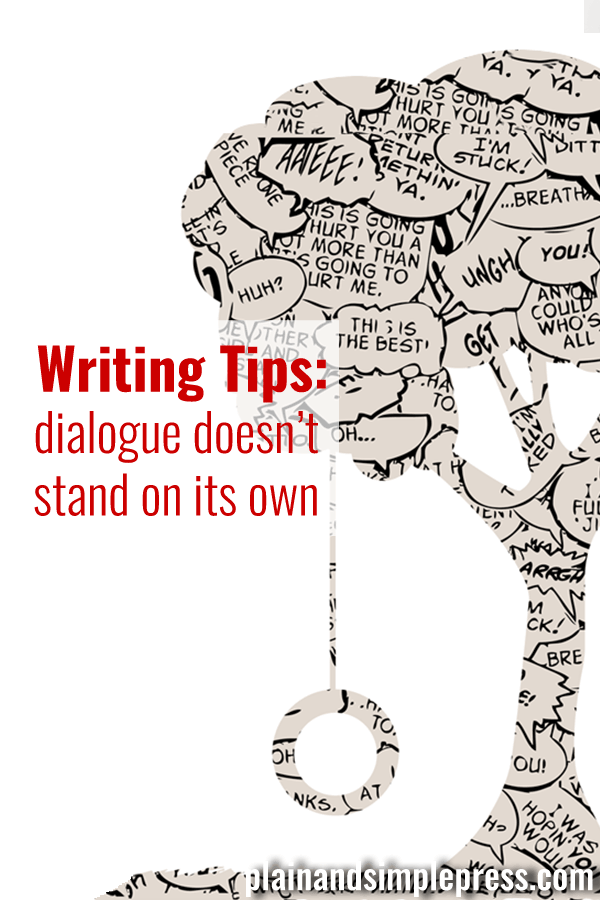 Lately I’ve been reading a lot of dialogue in manuscript. Some would-be famous novelists are better at it than others. Ditto some published novelists.

Recently two things have struck me about the products of people who are developing skill in writing conversation: they either get so baroque with the attributions as to become unintentionally silly (“Let’s go,” said Tom swiftly…or better yet, “Let’s go!” Tom ejaculated), or they go full throttle in the other direction with no attributions (“dialogue tags”) in page after page of back and forth (this is called stichomythia: extended dialogue with no he saids).

Dialogue serves several purposes in fiction. It fills in backstory. It helps to characterize the story’s people. It slows down action. It may deliver the occasional surprise. Whenever you use dialogue, you should use it to accomplish something, not throw it in there because you think fiction has gotta have dialogue.

Dialogue does not exist in a vacuum. People think things while they’re talking. If the scene is told from a single character’s point of view, the writer will share only that character’s train of thought. But everyone’s outwardly visible activities can be shown, allowing us to surmise what they might be thinking. People get up and move around. They sigh. They smile. They frown. They raise an eyebrow. They look puzzled or quizzical. They observe other speakers in the scene. They become momentarily distracted. They indulge an idiosyncrasy. You name it, they do it.

Describe THE WHOLE action, not just the motion of the mouths and the vocal cords.

Here’s a dialogue-heavy passage. Note the parts that are not dialogue but that complement or elucidate it:

Kay and Fallon walked back toward their camps. They were joined by Devey Mayr of Metet, a tough A’oan who, though Kaybrel thought he looked too young to sit a horse, had led his party of fifty men straight through Roksan’s main gate in the minutes after the barriers fell. Devey affected a little strut that made him attractive to women, and sometimes made other men wonder what he was trying to prove.

“So you think the pickings are pretty slim on the coast?” he asked Kay.

“I know they are,” Kay replied. “Well, actually—they say the people in the far south are better off. But about ten years ago Hef of Aber’—you remember him, Fal? He died at the battle of Pakta.”

Of course, Kay thought. Fal would have been about twelve or fourteen at the time. “Hef and I crossed the Wammets and reached the coast about as far north as Bose. We damn near starved out there. Didn’t find many people—a few ruins poking out of old silt flats, nobody living in ’em. They don’t have much food, and truly, we didn’t see any decent stock as far as we went. We made it down into Galifone, to a place the locals called Hamun Bay. The ocean is something to see, but it’s not worth driving a whole army over a mountain range.”

“A few. Not many. Doesn’t rain there much. Most of the seacoast is desert. We ended up having to live off the land most of the way—and believe me, there’s not enough to support twelve hundred men.”

Devey looked disappointed. “I’d like to see that ocean,” he said.

“Yeah, it’s almost worth the trip,” Kaybrel agreed. “But go there on your own. No point in taking a big party. Just go check it out.”

“Maybe next summer,” Devey said. “I’d have to get leave from Bose. And Lhored, I expect.”

“Wonder if he’d let me and a couple of my guys run over there now. We could probably get ourselves back to A’o before first snowfall.”

“Somebody’d have to take my men while we were gone. How’s about you, Fal?”

Devey smiled and scratched absently at a half-healed rash on his arm.

“Wait till next summer,” Kaybrel said. “If I come into the field, I’ll take your men with mine.”

“What ‘if’? You planning to stay home next year?”

“Well, I’m not so young any more, Devey. Three or four months in the bush gets a little tired, you know, after a while.”

Devey considered this for a moment but couldn’t let it rest. “You’re no older than the brez,” he remarked.

“I’m four years older than Lhored,” Kaybrel said. “Our mothers were the same age. We were both first-born.”

“Yes. But his time is coming to an end. Just seven more years.”

“Long enough,” said Devey. “You must be forty-two, then?”

Fallon rarely contemplated the possibility that his friend was past the middle of his life. Kaybrel always struck him as vigorous, and Fallon thought of him as somehow near his own age. In truth, Kaybrel had come to the time when six and a half years looks hardly more than a day in the future; to Fallon and Devey, it still seemed a long time.

They passed in the direction of the A’oan campsites. A round, red-headed lad emerged from that crowd, waved, and strode over to Devey.

“Hey,” he said. Devey gave him a rough hug and a playful shove. “Duarto and Guel’ say you brought us a new chacho,” he said to Kay.

The remark that “Devey affected a little strut…” is what literary journalist Tom Wolfe used to call a “lifestyle marker“: habits or personal accouterments that reveal, sometimes deliberately but often unconsciously, some cast of mind or statement about oneself. Dialogue, like description, lends itself to lifestyle markers. The way people speak and behave while they’re talking often says as much about them or about what they’re thinking as what they say explicitly.

Within the book’s context, Devey is an adventurer; Kay is a seasoned warrior who also has passed some time as a traveler and adventurer; Fallon is Kay’s follower, for whom Kay serves as a mentor. Both Fallon and Devey are younger men; Kay is old enough to have grown tired of war-making. These characteristics are introduced or developed in the passage of dialogue, which appears near the top of chapter 1.

Dialogue doesn’t stand on its own. Let it articulate with the rest of the story, and work in narrative and description to help accomplish that.