Ella’s Story follows people who live ordinary lives as citizens of a vast interstellar empire. Indeed, a galactic empire. Each chapter will be posted individually here at the Plain & Simple Press blog about once every three weeks, and then links will be collected at a single page devoted to the book. Come on over to the Ella’s Story page to find all the chapters published so far, as well as the cast of characters and a list of place names. 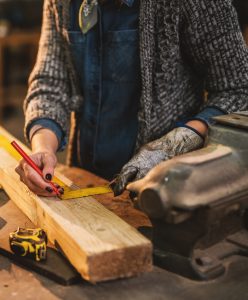 Sigi, the personification of common sense, bent over the big table in the downstairs kitchen and eating hall, where she had spread out her draft plans for the proposed new clinic. Her short ebony hair, lit by the dining hall’s light-walls and lanterns, glowed with a shine that spoke of her robust health and energy. Dorin and Darl, uniformed like Sigi and all the kitchen and scullery crew in the Kaïna’s aqua-blue liveries, studied the sheet she had unrolled across the tabletop.

The afternoon was past half-done, and Ella had come downstairs to check on the happenings and give herself a moment’s break.

Slender and sturdy, the young woman worked with rare concentration, Ella thought. Around her pots clattered, domestic machinery grumbled, kitchen servants gossipped and laughed, a couple of small children tussled over a set of toys. Banging pots and pans, Lior the cook genially ordered his crew around, while his wife Tabit, one of Ella’s fondest friends, clucked over Darl, who, Tabit had decided, needed hot tea and personal care. 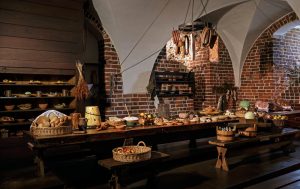 Ella slid onto a bench near the cluster around Sigi. As if by magic, a grey mug appeared at her elbow. Tabit poured steamy tea into it.

“Good day,” the plump woman greeted her. “How’s your day?” Her curly hair was graying amiably.

“About the same. But a dull moment never goes unpunished: we need to go into town to reprovision for the Kaïna’s dinner party.”

Ella sipped the brew in silence, watching the carpenter woman and the new doctor pore over the evolving floor plan.

“This wall,” Sigi was saying, “holds up the roof from here to here.” She indicated points on the exterior walls. “We can’t take it down. But we can put new doorways in it. Or close up old ones.

“Where do you want water to come in?”

Darl gazed at the diagram, apparently thinking. “There should be a sink and a tap in the exam room. And any lab space – that’ll need hot and cold running water. And if we’re to do any surgical procedures, the room where that happens will have to get the same: hot and cold.”

“Yeah,” Dorin agreed. “But if you had a couple of those rooms back-to-back, a single source could supply them both. Just run the spigots from the same connection, only on either side of the wall.”

An exquisitely unmechanical soul, Tabit distracted Ella’s attention from the strategy session. “Do you mind if I take Bintje into town with us this evening?”

Ella smiled. “Then you can listen to her bellyaching!” 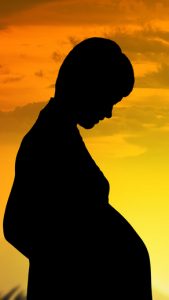 Tabit laughed. “Give her some slack, sister. She’s never been pregnant before.” Tabit had three children in the Kaïna’s service, two of them mostly grown and holding jobs in the city.

“Thank the Goddess for that!”

“Well, there are some small favors to be grateful for. How about it?”

“I suppose. Just don’t let her out of your sight.”

“That is the truth.”

The clinic’s layout grew more concrete beneath their gaze: a shaded walkway along the front face (this would require a new extension of the roof to be built, filling a good week of Sigi’s time); a reception room with a desk, communication and records equipment, and seating for the proposed patients to wait; behind that a suite of rooms to include one dedicated to examination, one for whatever procedures Darl could conduct on his own, and a lab. But wait! He would need a private office, no? Rearrange that plan…

As this discussion proceeded, the mother herself appeared at the top of the stairs.

“Oh, dear Goddess. Did you tell her you were going to ask me about that trip into town?”

“I must have done something to offend. It would be kind if She would tell me what it was… Would you hie her over here, please?”

Tabit gave her a co-conspirator’s glance and got up to retrieve the girl. Or, as Ella thought of her, the brat.

Bintje and Tabit approaching, Ella rose to her feet and broke into the group’s conversation.

“Would you like to meet your first patient, Mr. Darl?”

He looked a shade blindsided but gamely replied, “Of course.”

Ella wasn’t sure how much Dorin had told him about the Bintje situation. As little as possible, she imagined.

She presented the young woman with a gentle push toward him.

“This is Bintje. Bintje, Darl here is our new doctor. And Darl, Bintje is our new mother.”

He smiled – a little uncertainly, she thought. “Evidently,” he said. “I’m glad to meet you, Bintje.”

The girl also looked uncertain. “Mr. Darl,” she greeted him. “Welcome to our home. I hope…you like it here.”

“Darl will be taking care of you, now that he’s on his feet.”

“Oh,” Bintje said, almost a gasp. “But…won’t I be able to see Piritsi again?” Piritsi was the village midwife, who had delivered every baby born at Skyhill within living memory. “I’m supposed to go to her tomorrow afternoon.” Bintje shot a sidewise glance at Darl and then looked up at Ella.

Just the kind of backtalk Ella expected. The expecting annoyed her more, not less. The expecting, she reflected with an inscrutable smile, all the way around.

“Well, you understand…the reason the Kaïna bought this man was so that he could care for her people here at Skyhill. He is a doctor, after all.”

Bintje looked to Tabit for support. Tabit shrugged. Bintje’s face reddened. She appeared to be about to cry. “But…”

Ella cut her off with a glance. Bintje evoked an even more dramatically downcast face.

“Wait a minute,” Darl interjected. “May I go with you? I’d like to meet the town’s midwife. It would be good for me to know her…and she and I might be able to work together, no?”

Tabit smiled and raised her eyebrows. Ella couldn’t guess whether this meant she was amused or questioning what would happen next.

“Why not?” Tabit said. “Then you won’t have to take her into town yourself tomorrow, sister. Or send me with her.”

“You could just put off today’s trip until tomorrow, sister,” Ella pointed out.

“There are some things Cook needs for tonight,” Tabit replied. This one always had an answer at hand, Ella thought. Was she another Bintje when she was a young thing? Couldn’t be: surely this world was never visited by two of them.

“All right,” she capitulated. Bintje’s woebegotten clouds disappeared and her face lit up with a broad smile. Tabit nodded her approval in silence.

“What are you doing down here, anyway?” Ella asked. Bintje was supposed to be cleaning the rooftop pool patio at this time of day.

The prospective mother supplied and Tabit returned to the food prep crew, Ella turned to Darl before he could get too re-engaged in the plan-fest.

“Yes, ma’am,” she corrected him as she walked away.

Not very much later, Darl found his way to Ella’s door, near the entry to the single women’s part of the slave quarters.

“Did I speak out of turn?” he asked, instantly after the new hello’s were exchanged. She gestured to him to take a seat near her desk.

“No, not at all. Not really. I’m just feeling a little cranky today.” He looked unconvinced. “Just remember: it’s ma’am for a female overseer or a free woman. Madame for a woman aristrocrat. And sir for just about everyone else. But that’s not what we need to talk about.”

He sat down and looked attentive, refraining from any further question or comment.

“Actually, it’s a good idea for you to go with Bintje to meet her midwife. And I think it’s an interesting idea that you might be able to work with her – Piritsi, I mean – in some professional way.”

“Women who are trained to help deliver babies are often very competent,” he remarked. 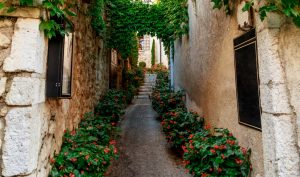 “Well… You need to realize that these people are not like…say, some paramedic on Samdela. A town attached to a Varn aristrocrat’s estate is not so much a town as a village. The inmates are pretty rural.”

“You’ll see, soon enough. It’s a nice change from the estate, though. And Bintje loves to bucket into town, at the drop of anyone’s hat.”

“Isn’t she. Look, there are some things you need to understand about that young lady. You can take her into town, that’s fine. But do not – do not under any circumstances – let her out of your sight. You’ll both know where you’re supposed to go and what you’re supposed to be doing. Go there, do that, and then come back.

“Do not let her talk you into taking any side trips or going to some shop or visiting whoever she thinks she’d like to visit or stopping at the town snack bar. Understand?”

“There’s nothing to think about this. It’s into town, take her to Piritsi, chat with Piritsi as you please, then turn around and bring her back here. If she says she’d like to go do something while you and Piritsi are talking, tell her ‘no.’ No exceptions. Keep her in your sight all the time.”

“Well…all right.” he sounded nonplussed. Or puzzled. She felt she should continue:

“Bintje, she can be quite a pistol. She knows she’s on restriction for a good long time – and she’s already very tired of it. She will try to pull some sort of fast one. Believe me. Don’t let her get away with it. Hm?”

“Truly, Darl: she will try to take advantage of you if she figures she can get away with it. Keep her in hand. Yes?”

“I understand. And I will.” He smiled. “You make her sound like an unholy terror.”

“No more than some of us were at that age,” Ella replied, mellowing a bit. “But yes,” she laughed softly, “you could use that term.”