One of the things that even my brightest students have the toughest time understanding is the passive voice, and why they should prefer the active voice. For those who want to learn to write effectively, either in a business setting or creatively, the distinction between active and passive voice matters.

And one roadblock to grasping that distinction, I’ve discovered, is that often other instructors don’t know what the passive voice is, and so they teach their students outright errors. There are many misconceptions about this.

Let’s start with the biggest one: THE PASSIVE VOICE IS NOT THE SAME AS THE PAST TENSE! Although the passive voice always uses a past participle, passive can express all the various permutations of past, present, future, subjunctive, and conditional. 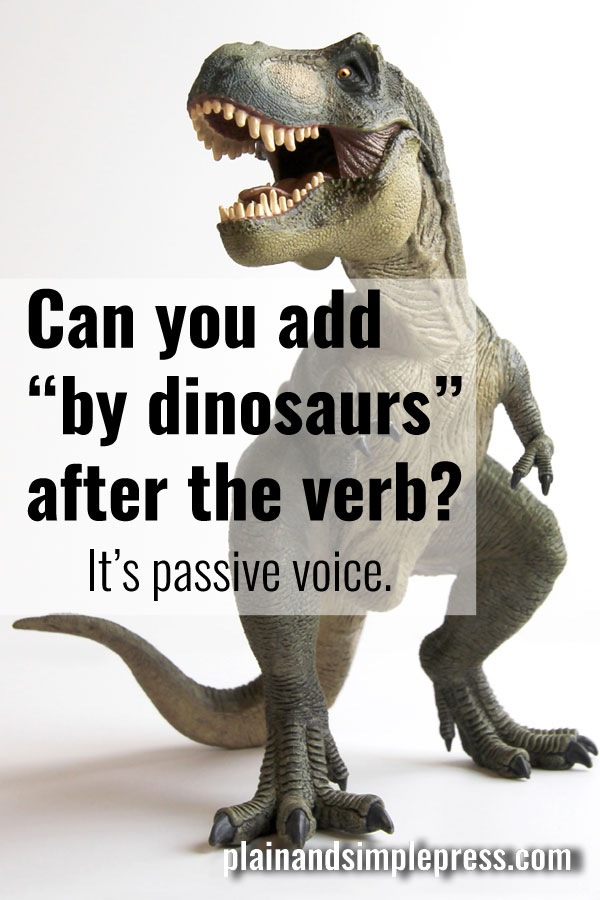 Here’s an example of the passive voice:

The trash is collected today.

Here’s an example of the past tense, having to do with trash collection, but set in the active voice:

The dinosaurs collected the trash today.

So let’s compare those in some other tenses:

Notice the difference? In the passive voice you can’t tell WHO did the action (the “collecting” in this example) without adding a bunch more words.

The active voice always makes the DOER OF THE ACTION the subject of the verb: X did Y. So…

The dinosaurs collected the trash today.

To tell the reader who collected the trash when you use the passive, you do this:

The trash was collected today by dinosaurs.

The trash was collected today by dinosaurs.

Here is the structure of the active voice, as plain and simple as it gets:

The verbs of being are am, is, was, were, be, being, been. A “past participle” is a descriptive word based on a verb set in any of the various past forms seen in English (-ed, -en, and various irregulars). Verbs of being are not in themselves “passive”; in the passive voice, a verb of being is simply used as a “helping verb” with a past participle to express a phrase’s action.

The advantages of the active voice are these:

2) Because it doesn’t hide information in a prepositional phrase, making the reader wait until the end of the utterance to find out who-done-it — or even leave that detail out altogether — it promotes clarity. Clarity is what you as a writer must demand. It is what you strive for. It is what makes your readers love you.

The passive voice, however, has its uses. Let’s consider a little story to illustrate.

Our friend Joe is hiking in the mountains. He likes to take his blunderbuss with him, so he’s tromping along with his long gun in hand. He is happy.

Suddenly he hears a rustling in the brush. What should pop up but…EEEEK! A bear!!

Joe takes his blunderbluss and blows the bear away!

Now he’s mighty proud. Though he wonders in passing how he’s going to drag this 600-pound trophy five miles back down the trail to his pick-up, just this moment he’s celebrating. He’s perched his foot on the deceased’s head and is pounding his chest, bellowing Kreeegah! Tarzan bundolo!

Now comes another rustling in the brush. Joe, who’s not the dimmest bulb despite the present appearances, quickly shoves his rifle under the nearest jojoba bush and stands aside. Now what should pop out but, heaven help us, the game warden!

Bears happen to be out of season today. And even if it were bear season, Joe is such a cheapskate he wouldn’t spring for a hunting permit, anyway.

“Heavens to Betsey!” the game warden exclaims. “What happened here?”

Joe, a retired career non-com, now works in a government office. He is a past master of the passive voice. He knows how to use it, he knows when to use it, and he knows why to use it.

Here, he uses it to pass the buck: he obscures his part in the event. It’s a deliberate ploy to confuse the game warden and throw him off the track.

Now, during all of this, we happen to have been hiding in the shrubbery, and we’ve witnessed this entire series of shenanigans. We are tree-huggers, and we are outraged! So, we jump out of the bushes, point our fingers at the perp, and holler, “Officer, that bear was shot by Joe!”

Notice what happens here. When we make our accusation, we also use the passive voice, but we do it to emphasize our finger-pointing.

This brings us to the second misconception about the passive: that you should never, ever use a passive construction. No. 🙄

There are two good reasons to use the passive voice:

1) To obscure the truth; and
2) To emphasize a point about who did something.

Otherwise, though, the passive voice is wordy and mealy-mouthed. If you must use it, do so only for a good reason.

One thought on “Verbs: The Passive Voice”