Yeah, you’re right: I haven’t finished writing this week’s installment of Ella’s Story, even though it lurks inside the brain ready to jump forth like Athena springing from the forehead of Zeus. And yes, yes, I did have three weeks to crank a paltry 1500 words or so, and so no, no, there’s no excuse. But…well…yes, I do have a whole slew of excuses, not the least of which is the demise of my beautiful little sidekick, Cassie the Corgi. 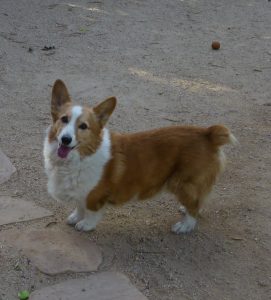 Cassie died, two weeks and a day ago, of adrenal cancer. Or possibly of veterinary malpractice, depending on your take on the sequence of events: she was not autopsied. That was quite a trauma — a long-drawn-out one — for the Human, who remains considerably depressed, even though Cassie was 13 years old and past the mean life expectancy for a corgi.

So: Excuse No. 1: I’m stunned. Crushed. Paralyzed in the creativity department.

Actually, getting yourself all wrought up and depressed usually spurs creativity (and truth to tell, I now have any number of Varn  scenarios floating around in the head),. So: yeah, sure.

Toward the end, Cassie had to be lifted on and off the bed many times a day. In her last day or two, though she was awake and responsive, she was almost inert. And she had a habit of positioning herself in clumsy poses just out of reach of the Human. Once when I picked her up, I felt something go r-i-i-i-i-i-p in the vicinity of the rib cage and thought “ohhh shit!” And yup: back pain that’s damn near crippling.

Managed to get her to the vet and attend her passing to the Other World. But after that? The pain has been blinding.

Trust me: after those adventures I did not feel like articulating a fantasy about imaginary people in a galaxy far, far away…

Then…oh yes, then: I fell and sprained my wrist. Even though nothing was broken and it’s slowly healing, this added another layer of long-term pain.

To make things more interesting, I’m allergic to NSAIDs. Yeah. All of them: aspirin, acetaminophen, ibuprofen, you name it. Though I have some oxycontin left from piles of pills the doctors foisted on me during the Year of the Surgeries (six surgeries in 12 months…), I do not use addictive drugs. So…no…I have another plan for those, which has to do with the Final Exit, whenever the time comes. I ain’t using that stuff for a pained back and a pained wrist.

That left, as the only viable analgesic, booze. Whiskey. Or wine. Depending on the mood. Works, you know. So, to some extent, do physical therapy exercises and yoga poses, which one can manage when one is adequately numbed by a shot of whiskey or a glass of cabernet.

So: excuses two and three:

Them’s my excuses, and I’m stickin’ to them.