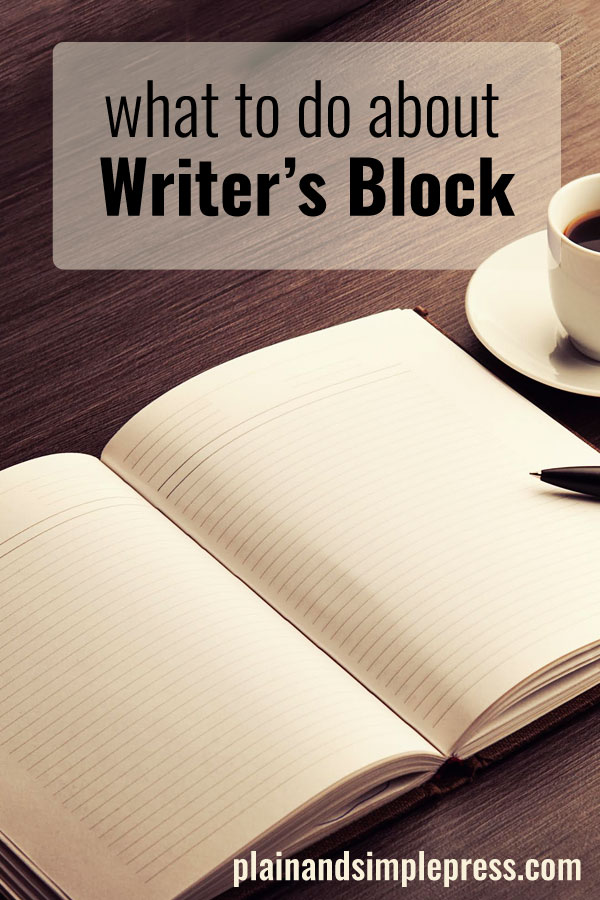 Students and scribbling friends have occasionally asked, over the years, for ideas on how to handle writer’s block. It’s not something I had much problem with, at least not as a working journalist, and so I have to confess to emanating a few glib answers:

• Visualize your byline on the “Pay to the Order of” line on the paycheck.
• Imagine your editor’s response when you call to say you’ll be late on deadline: “Bye!” Once and for all.
• Write a letter to your mom describing all the things you learned on assignment. The story will write itself after that.
• Go play with the cat.
• Pour yourself a (glass of wine, cup of coffee, can of soda).
• Go for a walk.
• Quit with the drama already and get down to work!

Those of us who write on deadline for pay rarely suffer from “writer’s block” — there’s no time for it — and so for years I doubted it was for real. But once I began to write novels, I realized that fiction is one heckuva lot harder to write than nonfiction. So much so, in fact, that you really do reach impasses where you know what you want to say (you think) and you think you know what your characters are gonna do and you can envision the time and the place and the action but it just won’t come out in words!

Disturbing. What to do when this happens?

It’s occurred a number of times during the writing of the Fire-Rider novels, and especially in Book II, which is in progress and which carries the characters and the action home from the battlefield and into new, more sophisticated psychological and moral territory than they traversed during the swashbuckling Book I. I’ve actually been reduced to having to think, of all the despair-inducing shockers.

Several chapters are written in the first person, from the point of view of a character named Hapa Cottrite, whose journals, in the series’ larger conceit, are the source of all we know about the people of the dark ages from which he writes. Cottrite: he flummoxes me. He’s smarter than me. His insights are sharp and closely observed. But he’s an outsider, and I’m not sure how much he understands, how much he intuits, and how much he could be expected to misinterpret or even to know nothing about. Meanwhile, because he’s an outsider, the other characters’ responses to him are multifarious and sometimes unpredictable. I’m almost scared of Cottrite.

None of this is conducive to fluent writing.

Nothing makes it easy, but a few strategies have come to hand. Let’s start with one today, and move on to others in the coming posts.

Enter notes, no matter how fragmentary, at the bottom of a chapter or scene. Use these as cues to help jump-start the narrative and keep it rolling around.

The current problematic scene has Lhored, the local boss of bosses (he’s the equivalent of a medieval king), visiting the widow and two sister wives of one of his followers (Mitchel), who was murdered while catting around a town they visited after a disastrous battle with the enemy. She is a potentate in her own right; her young adult son is a chip off his father’s block, not an altogether flattering comparison.

Lhored of Grisham Lekvel and two of Mitch’s followers arrive at Mitch’s castle; word of Mitch’s death has preceded them. Braced to answer her questions and to make some difficult explanations, they offer their sympathies. But…but…THEN what? And where is Mitch’s son?

She nodded patiently. “Let’s sit down.” She waved us all toward the fine leather and wool chairs and benches that populated the hall. Lhored was directed into a comfortable armchair and I was seated nearby. The three women pulled up smaller chairs to make a conversation circle around Lhored, the two mayrs, and me. Food and drink appeared, borne by two [women who look working class] and a young boy, and we were all served, solid stoneware dishes a luxury after our weeks of eating off tin plates.

“Yes. We heard before Mak’s men reached Rittamun. One of the outlying herdsmen brought word a couple of days ago.”

She let this rest briefly. “They say he didn’t die in battle. Can you…will you tell us how this happened?”

Lhored looked pained. This, he had said more than once, was the conversation he dreaded, and here it was upon him. “Bett,” he said, “we don’t really know.”

Zzzzzz…. Okay, you can’t be exciting every moment. Move on, move on!

Notes at the end of the file:

[what is going on here? What is Hapa observing? Move forward into some other part of this chapter and then come back here. This piece is going nowhere!]

What’s going on here? Darned if I know. Start writing some other part of the chapter? That’s a possibility. Then this comes to mind:

[Lhored is about to speak when Lenn shows up. Lenn is surly, aggressive, and obnoxious. He demands to know what happened to Mitch. What was he doing out there alone. Then he demands to know why they let him go out alone and D says he tried to go along and was rejected & the others say that’s so. They work their way around to saying HC was sent as a gift from the seeyo; they’d probly better tell them about the elaborate funeral and the loot first.]

All right. Let’s try that. It’s better than working, anyway. I guess. {sigh}

The front door opened, letting in a beam of light, and someone was heard passing through the vestibule. A tall, slender young man, about seventeen and still beardless, entered the hall. Dressed in work clothes and boots, he pulled off a pair of riding gloves and offered a hand to Lhored, who, with Mak and Jode, stood to greet him.

“Grisham Lekvel,” he said, accepting a firm squeeze on the shoulder from the brez. “And gentlemen: thank you for coming. Mother,” he addressed the kubnath, who remained seated, “sorry I’m late. We were working the stallion up on the other side of Nole’s Butte. I came as soon as Wood let us know you were on the way up the road.”

“It’s good to see you, Lenn,” Lhored replied. “And it’s good you were able to be here.”

He gestured as though he was about to introduce me to the young new kubna, obviously Mitchel of Cham Fos’s son, but Lenn interrupted.

“Lhored,” he said, “let’s get down to business. What the hell happened to my father?”

Meji gasped softly. The other two widows glanced at Lhored expectantly. Jode and Mak looked on, stolid as ever.

If Lhored was annoyed or otherwise perturbed, he didn’t let it show. “He was murdered,” he said.

“He died on a street in Lek Doe. Apparently the killer was a thief that jumped him.”

“That doesn’t make any sense. My father would take out anyone who tried to bring him down.”

“He probably didn’t see the guy come up on him. It was stone dark that night.”

“Mm hm. We think it was pretty late. He’d been out on the town. And he was in a lane where all the shops were closed.”

“Come on, man! What the hell was he doing out in the middle of the night, on some godforsaken back street in Lek Doe where nothing was going on?” Behind him, Bett sent Lhored a narrow-eyed [CAUTIONARY? GIMLET? PIERCING? SHARP???] look and shook her head, almost imperceptibly, no.

“We don’t know, Lenn. He must have gotten turned around and lost his way.”

“How the devil could something like that happen? Who was with him?”

“No one? What was he doing out there?”

Lhored regarded Lenn while he let this set for a second or two. “He was celebrating, lad. Far as we can tell, he’d just come from a saloon.”

Salon was more like it, I thought. Liana’s place did let the liquor flow, so one could call it a bar. Sort of.

“Celebrating? If he was partying, why wasn’t anybody with him?”

Progress made. Very, very slow progress. This took all afternoon to gag out. At least we’ve got some conflict going on, between the “king” (as it were) and the surly young son of the deceased potentate, heir to his father’s rank.

We haven’t gotten around to the delicate matter of why Mitchel refused to take anyone with him when he went out for a night on the town — he was haunting his favorite houses of ill repute — nor have we explained the potentially explosive matter of why Hapa Cottrite is present: he was sent by the town’s governing councilors as a kind of “gift” to express their regret at the loss of a powerful and dangerous warlord. But at least we have something in glowing little computer characters.

Do plot outlines, scene outlines, or just random notes ever help you to get past a low spot in your writing?

The passage above is draft material for a yet-to-be published sequel. But the story of what happened to Mitchel Kubna of Cham Fos appears in the third Fire-Rider volume. Order a print copy here, or download the Kindle version from Amazon. 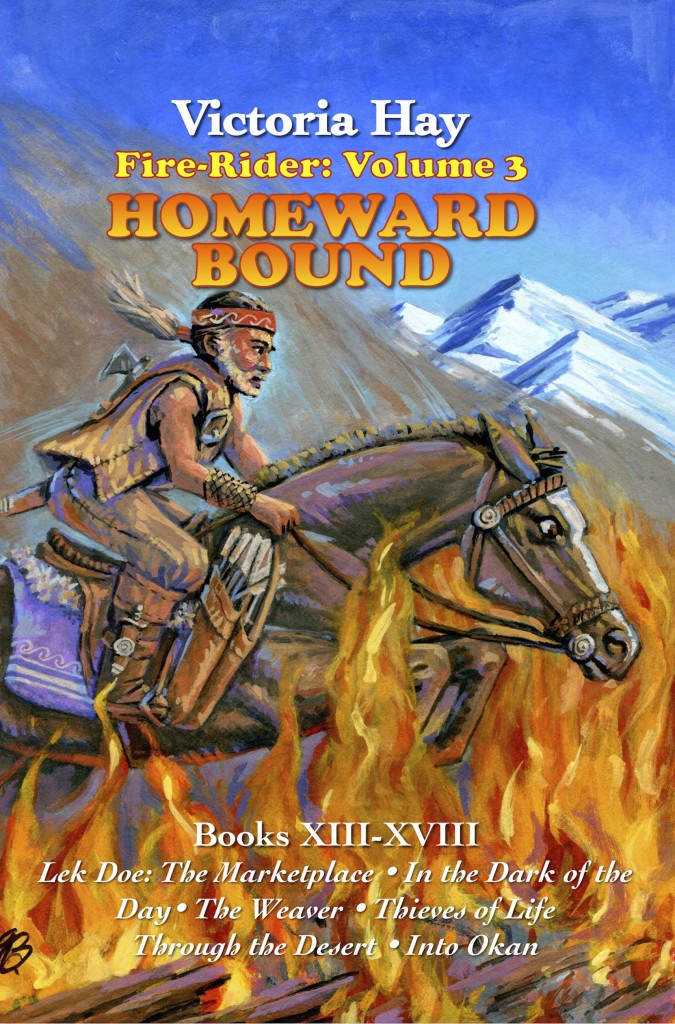