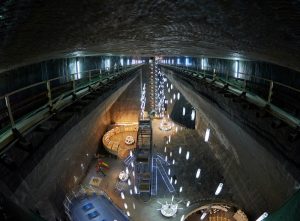 She had, as instructed, gone to Vighdi and asked for a day to travel up to Takrai by way of learning about the mining operation and seeing the sights. Vighdi, evidently apprised beforehand, had made no objection. Ella got her day pass and trotted out to the tube-car station, where Lohkeh stood waiting for her.

A chain of freight cars was rolling out of the station, headed toward Takrai no doubt bearing the same supplies whose arrival and offloads Ella had recently logged in the books she kept for the Company. Over a dozen rolling containers, she estimated, slipped into the dark tunnel in the distance.

Lohkeh smiled when he spotted her, called her “sister,” and guided her toward a walkway over the pavement.

At the gate to the bridge, they each ran the backs of their hands under a passcard reader, allowing the embedded code to register. From there they were at liberty – or as much so as anyone, free or slave, could get in an underground passageway beneath the surface of a steaming moon.

She must have looked a little wide-eyed. “Is this the first time you’re come outside of Ethra Compound?” he asked. He sounded amused, distantly.

“I go back and forth to Takrai every week or two. Part of the job. Speaking of. . .give me a hand with these packages, will you?” He gestured in the direction of a stack of boxes standing next to a small air car. A wave of a pointer, pulled out of his workbelt pouch, opened the brushed-steel pod’s cargo door.

She helped him pack the cartons into the vehicle. Then they entered the passenger pod through a clamshell door that seemed to open unbidden.

The interior, padded in serviceable gray upholstery, was comfortable enough – surprisingly roomy, she thought. Lohke climbed in, beckoned to close the door, and settled into a seat facing her. Without a word, he raised a hand to his face, brushed a finger past an ear, and raised an eyebrow a faint smile going as fast as it came.

She understood: listeners. Barely noticeable, a passing nod of her own acknowledged the message.

“It takes about 40 minutes to come to Takrai Station,” he remarked. “Then we have to get through the freight docks to reach a passenger ramp.”

“Is it underground the whole way?” she wondered.

“The direct route is. But there are side stops here and there.” 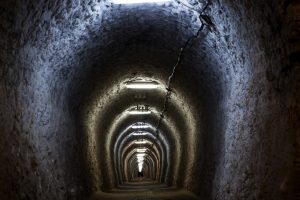 The tunnels, she knew, protected any passengers on the vehicles from Zaitaf’s extremes of heat and cold, and from the cosmic radiation that rained onto the surface absent an atmosphere of planetary heft.

Lit only faintly by embedded strings of emergency lighting, the view through the car’s small windows was mostly black as night. At intervals they passed a small alcove or lurking piece of equipment. But once she saw one of each, she’d seen them all. Disappointing: he’d offered to show her the sights, and so she assumed there were some.

“Have you ever seen a geyser?” he asked, as though he were reading her mind.

“Don’t know what that is,” she admitted.

“No. Well, there aren’t a lot of them on Samdela. At least not that the underclass can see.”

“It’s like this . . . blast of water and gasses that comes shooting out of the ground. Here on Zaitaf, they’re mostly hot water and methane.”

“Methane? It’s what makes your farts flame up if you set a lighter to them.”

She looked at him, amazed, and laughed. “That sounds splendid!”

“Zaitaf: ever lovely!” Grinning at her dubious look, he barreled on: “There’s a lot of heat under the crust. And a fair amount of water is hiding underground, too. The water gets hot in some places. It’ll seep through the dirt till it finds a hot spot, and then when it hits the boiling point it’ll blow its way through the surface.”

“You mean catch on fire? Not exactly. There’s no oxygen to speak of in Zaitaf’s air.” Catching her blank look, he added, “Oxygen is what makes flames happen.”

“Oh.” Not the methane stuff? she wondered. “So it just blasts out?”

“Into the sky. Like a giant fountain. It’s something to see, especially if the sun is high enough to light it up.

“Maybe we’ll get to see it. Up here a couple miles, we can turn off on a spur to a view station that looks out on Lake Jesiah. The richerati feel like they have to come here…it’s one of the attractions that call them to Zaitaf.”

“Yeah,” she said. “I’ve heard there were things to see. So this thing is like the hot springs?” She thought of the pools and tubs of near-simmering water that she’s had the privilege of cleaning not so long after being assigned to labor at the resort.

“Like that, only combined with a frozen methane pond.”

“If the water’s hot, how can the stuff be frozen?”

“Because the surface is beyond cold. That’s why the methane is a liquid. If Zaitaf were warm enough for us to stay alive out there, the stuff would evaporate. It would be a gas.”

How unlike a Samdi capo, she reflected. On Samdela, one knew what one needed to know to survive and put food on the table. Anything else—like what caused your farts to burn—was neither needed nor wanted. She studied him blandly, with effort hiding her puzzlement.

The little car came to the side tunnel’s end and parked itself. Lohkeh glanced around briefly. “Great!” he said. “It’s all ours. C’mon!”

She followed him up a short ramp and then through a door that slid open at their approach and, after they stepped into a rotunda-shaped lounge, sighed shut behind them. Banks of ceiling-high windows filled about 290 degrees of curved walls. As they entered, bright outdoor lights came on, revealing a rocky, pitted landscape of dust and stone, holes and hills in all directions. 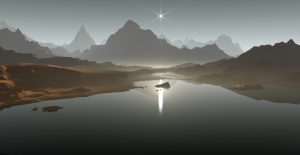 “Meet Lake Vesiah,” Lohkeh announced. With a wave of his hand, he directed her attention to a broad, shining sheet that lay in a basin bordered by low rises and a few rocky upthrusts.

The still, polished surface shone like plate silver. Around its edges, it reflected nearby stony ridges. Looking closely, she realized it also reflected the galactic arch that stretched through the black sky overhead, blurred and faded  in the glare of the station’s artificial lights. Without the lighting, the surface would echo the universe in a perfect mirrored tracing across the barren landscape.

“Right there,” he said, “that’s a lake of methane. Have a seat.” He directed her to a chair among a group set around a low table. “I’ll get us a treat. You like whiskey?”

“We’ll get in trouble,” she protested, unconvincingly even to herself.

She named the harsh, inexpensive hootch popular among the women she hung with back on Samdela.

Lohkeh winced. “How about you let me choose one for you?”

“All right.” She didn’t know whether to be offended or grateful. Or scared: how would they be punished if anyone found them getting into the tourists’ liquor stores?

He poured a splash into each of two fine porcelain cups he’d pulled out of a crystal cabinet, handed one to her, and then slid into a nearby chair. He put his feet up on the table and, possibly with more flair than necessary, relaxed.

“This is a favorite tour stop for the Great Ones,” he remarked after a sip and an appreciative sigh. “Some kind of government chivaree is happening on the surface just now, so there’s only a few of them at the resort. And it’s the middle of the ‘night’ for them just now—they’re all asleep. Or wish they were.”

The room, she realized, was as expensively furnished as it was spare. The chairs and tables they’d moved in on wasted no unnecessary embellishments or pieces. Same was true of the long, curved bench pressed against the wall beneath the windows that spanned three-quarters of a circle, looking out onto the dark and barren landscape outside. Yet she’d never set her tush in a chair so comfortable. The thing felt like it had been custom-made for her.

“Uh oh,” Lohkeh interrupted some small talk a few minutes later. “Did you see that?” He indicated the placid metallic lake.

“A moon fart.” He grinned at the look she gave him. “Just watch. It’ll take a minute or two.”

He got up, retrieved the bottle, and poured them each another inch of the velvet elixir.

Ella had never tasted anything like this — and on the occasional job she had been expensively squired by some well-heeled men with well-heeled pocketbooks. It was sweet but not sweet, soft to the tongue. Its luxuriant perfume floated into her nose. This Lohkeh was what she thought he was. Maybe more than what she thought. She didn’t know why she should feel surprised at that.

He nodded in the direction of the lake again, and she followed the line of his sight.

“Oh, my goodness!” she gasped. 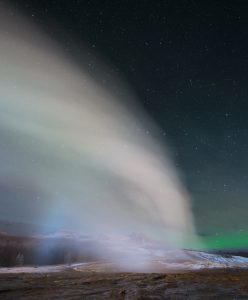 A vast radiant plume shot out of the now roiling, shimmering surface, reaching through the black sky toward the distant stars. It sprayed gold and red and blue mist around itself as it blasted upward, streaking toward the infinity above them.

She glanced at him, nonplussed, then turned back to stare out at the exuberant jet.

“Water? How can that be water? And where the hell is it coming from?”

He laughed and, not answering, watched her gaze in astonishment.

“I don’t understand,” she said after a minute or two. “What is that? Really.”

She stared, silent, at the pillar. Wreathed in iridescent, swirling fog, it reached several hundred feet above the lake’s surface, lingered for awhile, and then subsided, bubbling back down whence it came.

After Lohkeh returned the decanter to its backlit glass shelf, only slightly relieved of its contents, and then washed, polished, and put away the delicate cups they’d used, they climbed back into the aircar and continued on their dark and claustrophobic way. 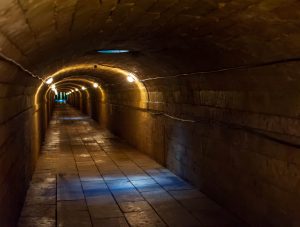